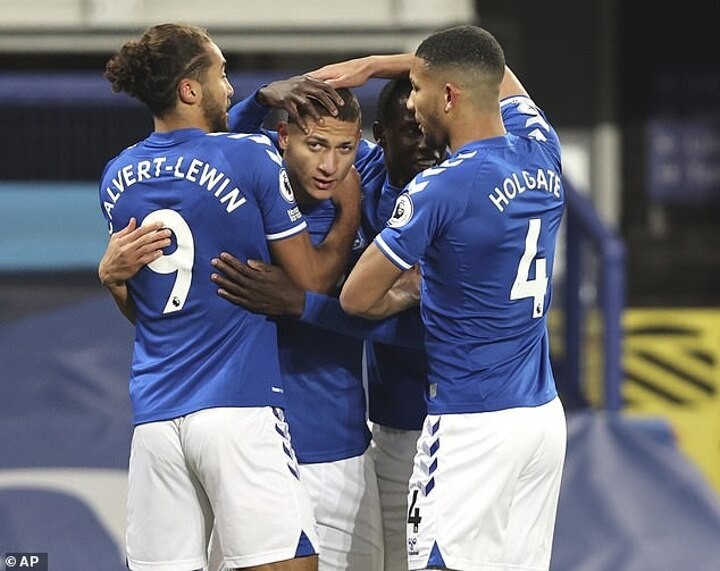 Everton will just miss out on qualifying for next season's Champions League because their squad is 'just short' of their top-four competitors such as Merseyside rivals Liverpool.

Carlo Ancelotti's men went level on points once more with Jurgen Klopp's side and with a game in hand on their rivals after Richarlison's early strike saw the Toffees overcome Southampton.

The win at Goodison Park - just a week after they recorded their first win at Anfield since 1999 - means only Howard Kendall has a better win percentage than Ancelotti following his first spell at the club in the 1980s.

And while admitting the Italian's experience at European pedigree could prove decisive in their bid to make the top four, Carragher expects Everton to miss out due to Klopp's Liverpool and Thomas Tuchel's Chelsea possessing stronger squads.

'The squad of players is maybe just short of some of the other sides, you think of Liverpool and Chelsea. But if you look at the manager they have got, we have already spoken about his record and also how much of an impact he has had at Everton.

'I think the last two wins have pushed his win percentage above 50 per cent. No Everton manager has been close to that since Howard Kendall's first spell - Everton's best ever manager - so that shows the job he has done since he has come in.

'I think if Everton are to get to the top four a lot of it will be down to Ancelotti. I think other teams fighting for it maybe have better XIs or squads, but with that man in charge anything is possible.

'The challenge should be top four, if you are Everton now and you don't qualify for Europe I think that would be a real disappointment. What they have to be thinking is the Europa League is the minimum, but they should be seriously thinking about top four, why not?'

The victory against Ralph Hasenhuttl's men ended a run of five league home games without a win, with the Toffees' most recent league win at Goodison Park before Monday coming against Arsenal on December 19.

Meanwhile, eight of their 13 wins have come on the road but former Everton forward Mark Hughes believes they will go close to finishing in the top four if that form can be replicated on home soil by building on their latest three points.

'It [Everton finishing in the top four] is a possibility yes, I think it is important that they won the game tonight,' Hughes said. 'Their home form has not been great but they have broken that cycle of not winning at home.

'You would imagine if they can sustain into the games they have ahead that they will go close. There are always times in a season when you get a run of results and start scratching your head wondering when it is going to change around.

'Their home form would have been a concern for them but they have broken that cycle now so you would like to think they would be able to push on and pick up points at home like they have done away from home.'