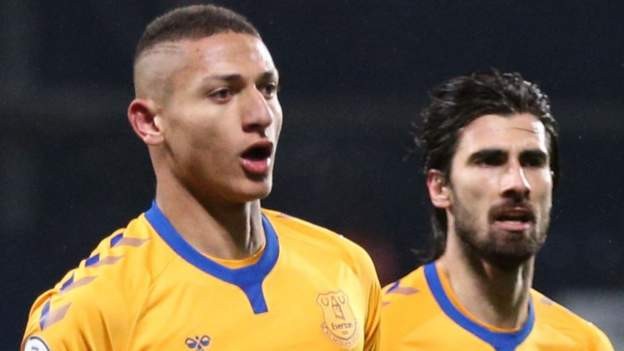 Everton continued their push for European football by beating struggling West Bromwich Albion at The Hawthorns.

Richarlison scored for the fourth Premier League game in a row, heading past home goalkeeper Sam Johnstone after a cross from substitute Gylfi Sigurdsson, who had only been on the pitch for 43 seconds.

West Brom had been the better team in the first half but England keeper Jordan Pickford made an excellent save to keep out Mbaye Diagne's second-minute header.

Diagne thought he had grabbed a 93rd-minute equaliser when he controlled a pass and shot into the net, but he was denied because he was narrowly offside, with the video assistant referee (VAR) confirming the on-field decision.

This win takes Everton up from seventh to fourth - the last Champions League qualifying place - although the Toffees will drop back to fifth if there is a winner in Thursday's late game between Liverpool and Chelsea.

West Brom are 19th, in the relegation zone and nine points behind 17th-placed Newcastle United, who they host on Sunday.

Ancelotti's Everton continue to get results

Everton have been English champions on nine occasions but since the launch of the Premier League for the 1992-93 season, have only finished in the top four once - in 2004-05.

Indeed, they have never played in the group stage of the Champions League, missing out in 2005-06 after a 4-2 aggregate loss to Spanish side Villarreal in the third qualifying round.

However, with 12 league games to go, Carlo Ancelotti's team have a great chance to be playing alongside the continent's elite next season.

Thursday's win continues a remarkable turnaround for the Toffees, who were in the Premier League relegation zone under Marco Silva in December 2019, before he was sacked and caretaker boss Duncan Ferguson lifted them out of the bottom three, with Ancelotti then continuing that progress.

Instrumental in Everton's revival has been Dominic Calvert-Lewin and the England striker, who scored a hat-trick in the Toffees' 5-2 win over West Brom at Goodison Park in September, had their best chance of the first half.

A fortunate deflection took the ball into his path but he shot against Johnstone's legs from 12 yards with only the keeper to beat.

Richarlison also had a first-half chance but a superb challenge from Darnell Furlong denied the Brazilian, as the deflection took the shot narrowly over the top.

But the forward was not to be denied later on when he got in front of Johnstone to meet Sigurdsson's cross from the left and powerfully head home from close range.

The result also continues Everton's fine away record - they have now won nine of 13 league games on the road this season.

Baggies perform well, but fail to pick up a point

West Brom had come into this game on an unbeaten run of three games, with clean sheets in their past two, and they will surely feel they deserved something from this game.

They thought they had got a point in injury time, when Diagne superbly controlled the ball and fired past Pickford - but the assistant referee raised his flag and the VAR footage showed he was offside by under a foot.

Manager Sam Allardyce has managed seven other clubs in the Premier League - including Everton - but never been relegated from the top flight, although this will surely be one of the best achievements of his career if he can keep the Baggies up.

He replaced the sacked Slaven Bilic after West Brom had picked up seven points from their opening 13 games, but they have now only gained an additional 10 points in Allardyce's 14 games in charge.

However, he should be pleased with his side's performance on Thursday.

Diagne was their main threat but was denied by Pickford in the second minute, then later shot over on the turn and also headed just off target following Furlong's long throw.

Michael Keane (Everton) wins a free kick in the defensive half.

Bernard (Everton) wins a free kick in the attacking half.

Attempt blocked. Robert Snodgrass (West Bromwich Albion) left footed shot from the right side of the box is blocked.

Matheus Pereira (West Bromwich Albion) wins a free kick in the defensive half.