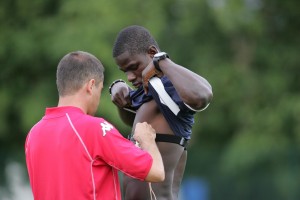 The centre-back agreed a four-year deal on Thursday to play top flight football next season in the French Ligue 1.

Mensah, a member of the 2009 Fifa World Cup winning team, spent last year at loan at newly-promoted Spanish side Granada from Udinese.

The club, founded in 2003, believes the youngster has the credentials to solidify their defence.

"At 21, he already has three games on his resume World Cup and that is not for nothing. Sometimes a player is free and very powerful and goes fast. Bernard Casoni (head coach) wants to have four central defenders, we have three currently. We are therefore lacking, " Dupraz said.

Mensah could make his debut for the club on Saturday in a pre-season friendly against Nantes.