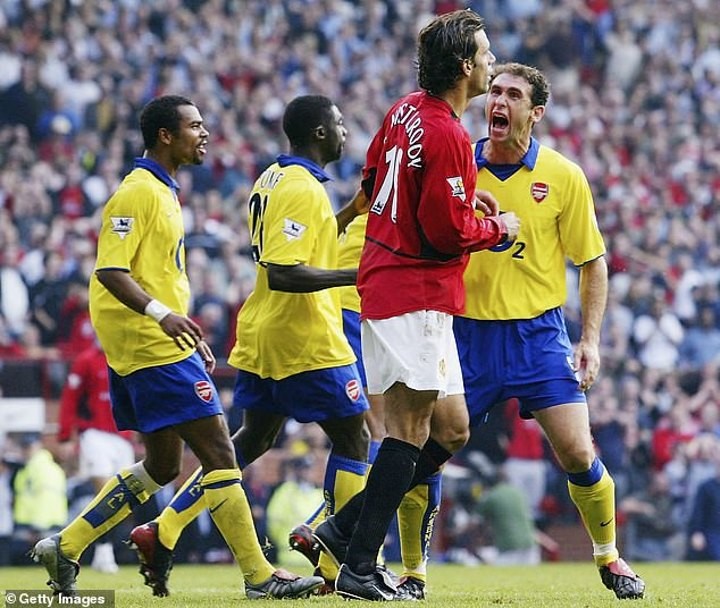 Ex-Arsenal defender Lauren says he would do it all over again after talking about the 'Battle of Old Trafford' in 2003 when tempers flared over between Manchester United and the Gunners.

Ruud Van Nistelrooy's penalty smashed off the crossbar in stoppage-time, as Arsenal escaped with a 0-0 draw in a game where captain Patrick Vieira was sent off.

Numerous Gunners players confronted the United striker after the game, resulting in a flare-up. Both teams were fined, but Lauren does not regret standing up for his team-mates at all.

'People have asked me many times, "Would you do that again?." I always say 120 per cent I will do it,' he told the Handbrake Off podcast.

'Because I always said when I came to Arsenal, I feel like they are my family. We had a very great batch of people.

'We cared about each other on the pitch and outside of the pitch so I can consider Arsenal as my family, so therefore I will do whatever is necessary to protect my family.

'In this case against United away from home, I think I would do it every single year if it's necessary.'

Lauren played for the Gunners from 2000-2007, winning three FA Cups, two Premier League titles and was a member of the Invincibles from that 2003-04 season.

He then played for three years at Portsmouth before retiring in 2010 at the age of 33.