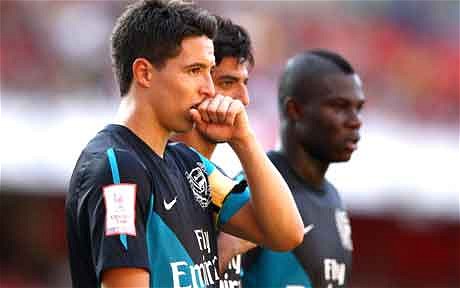 Former Ghana International Emmanuel Frimpong says he will never like former team mate Samir Nasir even if he gave him five billion dollars.

According to the 27-year old, the Frenchman was a bully and he had no respect for him.

Frimpong explained that both players first fell out when Nasri blamed Frimpong – who was sent off in the second half of a game between Arsenal and Liverpool – for their team's 2-0 defeat.

"Nobody needed to tell me that what I did was stupid," said Frimpong, who has been without a club since leaving Cypriot side Ermis Aradippou in 2017, told The Athletic.

"After the game, everybody came into the changing room and Arsene [Wenger] was quiet. Then Nasri basically stood up in front of everybody and said we lost the game because of me.

"OK, I can understand that, but I was thinking, 'Why would somebody - especially me playing, I think that was like my second game - why would any professional do that to a young player in that kind of moment?'"

The feud was rekindled when Frimpong questioned Jack Wilshere's decision to wish Nasri luck upon his move to Manchester City.

The attacking midfielder didn't take kindly to his younger team-mate's intervention, and the two almost came to blows at Arsenal's training base after Nasri rang Alex Song and asked to speak to Frimpong.

"I took the phone off Alex and it was Nasri on the phone threatening me, telling me that when he sees me, this that," Frimpong said.

"To be honest, at that time when he left Arsenal, I could tell him what I actually thought about him because he wasn't there so I could basically let him know my feelings. So I just told him that I don't like him, I don't respect him and I will never respect him as a professional player."

The two players subsequently clashed in a League Cup tie between Arsenal and City in November 2011.

"During the game, he told me he could buy me," Frimpong continued. "That's how stupid this guy is. He probably could then because he had millions, but that's no respect.

"That's what happened. I feel like he was a bully, I feel like he didn't know his responsibilities as a senior player to be able to help younger players.

Credit: With additional information from FourFourTwo