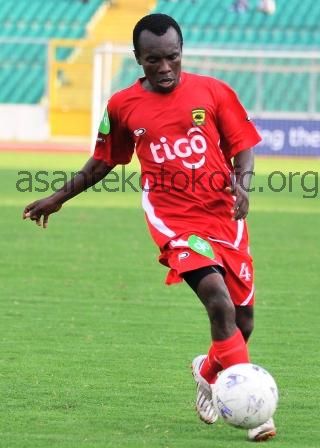 Former Asante Kotoko midfielder Stephen Oduro says not winning the 2002 CAF Winners Cup with the club and the May 9th disaster are his two career regrets.

Asante Kotoko were pipped to the CAF Winners Cup by Moroccan giants Wydad Athletic Club at the Baba Yara Sports Stadium in 2002.

Despite winning 2-1 in Kumasi to level the score to 2-2, the Moroccans won the cup on away goal rule.

Oduro was also part of the Kotoko side that lost to rivals Hearts of Oak in 2001.

Hearts of Oak were leading the Porcupine Warriors 2-1 with only five minutes to stoppage time.

However, the scoreline and the manner in which the winning goal came did not amuse a section of the Kumasi Asante Kotoko fans.

The away fans thought their team deserved more; others felt they were undone by poor refereeing decisions. Emotions were high, tempers fled, friendly banters became petty complaints, disapprovals turned to protests and tensions soon escalated into hurling of missiles.

Angry Asante Kotoko fans ripped up plastic chairs and hurled them on to the pitch.

The police responded with tear gas into the stands and gates were locked tightly with many fans having nowhere to seek refuge.

Many were trapped with a stampede ensuing afterwards. Hell broke loose and death was on a rampage.

The fans tried to run for their lives but they had no escape route. One hundred and twenty-seven, 127 Ghanaian football fans died as a result of the stampede. Many of which died of compressive asphyxia, according to doctors.

“Not winning the CAF winners cup in 2002 and the May 9th disaster are the two greatest regrets in my life. Truth to be told, our defeat to Hearts of Oak in 2004 confederations cup did not upset me,” Oduro told Angel FM.

“After losing the final I thought that was the end of my life because there were a lot of promises from our management. I thought I would not get money in football again due to that defeat because motivation in terms of money were high. You can ask any of my teammates.”

“We were promised a house each. Aside the house, there were other mouthwatering promises from the fans, the life Patron Otumfuo Osei Tutu. In all each player could have earned about GHC15,000 plus a house but it couldn’t materialized.”

“It took me three days to return to normal life aftermath of our defeat. I locked myself up in my room for several days but God knows best.”