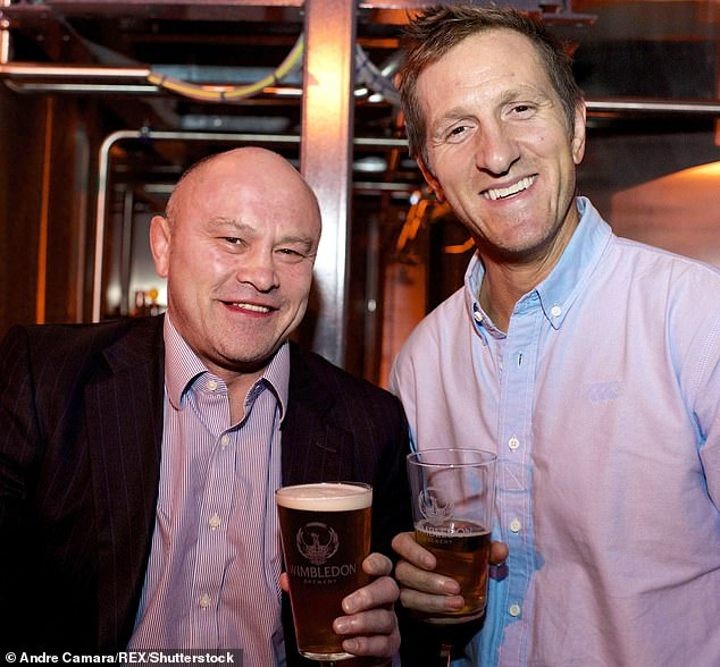 Former England international Brian Moore has hit out at Tim Martin over claims that the Wetherspoons owner owes him £20,000.

Moore took to Twitter to air his grievances over a lack of payment by asking Martin why he hasn't paid for the Pitbull beer that was sold in his pub chain.

The 58-year-old, who is affiliated with Wimbledon Pitbull beer, also branded the business mogul a 'c***' when asked if his claims were real by one of his Twitter followers.

He tweeted: 'Tim Martin - you owe Wimbledon Brew and me £20,000 for Pitbull beer you've sold. You have the money and the profit; why aren't you paying? Do we really have to issue a statutory demand? The brewery is a small local business - it needs the cash.'

Moore added: 'Youngs and Fullers have paid what they owed; why aren't you doing the same?'

When asked if his tweets were a windup, Moore bluntly responded: 'No he really is just a c***.'

Pitbull was Moore's nickname as a player and he has carried that into his post-rugby career with the name of the brewery.

It is another sting in the tail for Martin who has faced backlash after he sent Wetherspoons staff home last week, with workers saying they would not be paid.

Following the uproar, Wetherspoons will now pay its 43,000 staff this Friday for the hours worked last week, while the first payment under Government's wages scheme will be made on April 3.

One pub in south London had 'pay your staff' scrawled on it in graffiti by vandals following plans that staff would potentially go without their wages.

The firm has drawn up its own proposed rules as to how the Government's retention scheme would work, and has submitted these to ministers for approval.

Mr Martin said: 'As we have already confirmed, Wetherspoon will pay all our 43,000 staff this Friday for the hours worked last week.

'The first payment under the new scheme will be made on April 3, subject to Government approval, and weekly thereafter.'

Mr Martin thanked trade body UK Hospitality and the Government for their 'great efforts' in dealing with the logistical issues involved in introducing a complex scheme so quickly.

But his comments have angered people up and down the country - including one vandal in Crystal Palace, south London.

The chain's Postal Order pub on Westow Street was attacked overnight by a graffiti artist who sprayed 'Pay up!' and 'Pay your staff!' across the front in white and red.

The pub lies on the Crystal Palace Triangle, a shopping area where three roads meet.

Martin was forced to shut all of his 900 outlets after government advice last week told people they should not congregate.

He had claimed his company did not have the means to give staff their wages until they are reimbursed by the government.

Mr Martin had also sent an email to the pub chain's suppliers asking for a 'moratorium' on payments until the chain re-opens, according to Footprint, a  platform for sustainability in the food and drink industry.