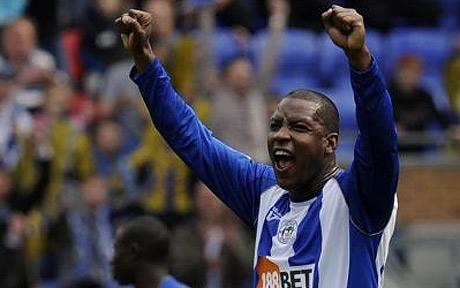 Former England defender Titus Bramble has praised the iconic Right to Dream Academy in Ghana and vowed to return to the famous football training school in future after observing their training methods.

The ex-Newcastle player made his first visit to the acclaimed academy this week in the West African country following the rave reviews in the global media.

The former centre-back, who also played for Wigan, Sunderland and Ipswich was on an official visit to acquaint himself with the operations of the academy.

Attracted by how the school has impressively churned out intellectual footballers who play the game at the highest levels including Ghana internationals Majeed Waris, David Accam, Thomas Agyepong, Yaw Yeboah and many others, Bramble travelled to Akosombo.

He observed how the players are trained to excel in football while combining it with their academic studies after being shown around by academy head coach Frazer Robertson.

"Great to spend the afternoon at @right2dream. Thanks @Frazer81 for looking after us and showing us around," the former England youth defender Bramble wrote on Twitter.

"Look forward to coming back and spending more time at the Academy."

Great to spend the afternoon at @right2dream. Thanks @Frazer81 for looking after us and showing us around. Look forward to coming back and spending more time at the Academy. pic.twitter.com/EQZmI7D3ry

After being released by Sunderland in 2013, he spent several years in a coaching capacity at Ipswich, with whom he began his career in 1998.

The Right to Dream Academy was founded in 1999 by British social entrepreneur, Tom Vernon to provide children from extreme poverty with the opportunity to build a better life for themselves and their families.

Scholarships are granted to young talented Africans by Right to Dream to study at the purpose-built Academy, located on the banks of the Volta River where students are taken through football, education and character development.

Right to Dream has over 30 graduates studying at High Schools and Universities in the USA and UK. In all, Right to Dream has helped to develop over 160 talented, young footballers – through a combination of football, education and character development.

It started on a small-scale, training just a few boys on a dust pitch in Accra.

It has grown to become a fully residential international school, offering scholarships to talented children drawn from all over West Africa. It is currently ranked as one of the best youth academies in the world by Bleacherreport.

Right to Dream squads travel to Europe regularly to compete in tournaments against the very best youth teams in the world.

Since 2008, Right to Dream has had the most successful African U-15 team. In 2015, Right to Dream U18 and U15 were unbeaten for a combined total of 42 matches on their European Tours.