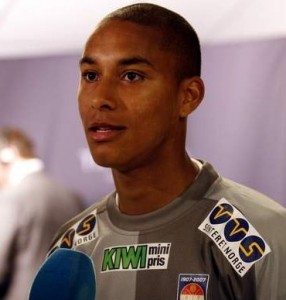 Ex-Ghana FA chairman M.N.D Jawula believes goalkeeper Adam Larsen Kwarasey has the potentials to prove as big a success with the Black Stars.

The Norwegian-born gloves man is in line to be handed his Ghana debut against either Swaziland or Brazil early next month.

Serbian trainer Goran Stevanovic will toss with the idea of choosing him ahead of the inactive but experienced Richard Kingson.

The StrÃ¸msgodset safest pair of hands was handed a starting role in Ghana's botched international friendly against Nigeria and could be presented with another opportunity.

Jawula believes the highly-rated goalkeeper can replace Kingson as the country's number one stopper.

He told Citi FM: ''Adam is young and ambitious and so I think if we give him all the support he'll succeed and will fit the shoes of Richard Kingson.

"I think he should be involved in the game as some point, either starting or coming off the bench so he build his confidence in the team.

"We want energetic and enthusiastic players in the team, someone who can parry the ball or intercept it and with enough room for improvement. I think he will do well for us."