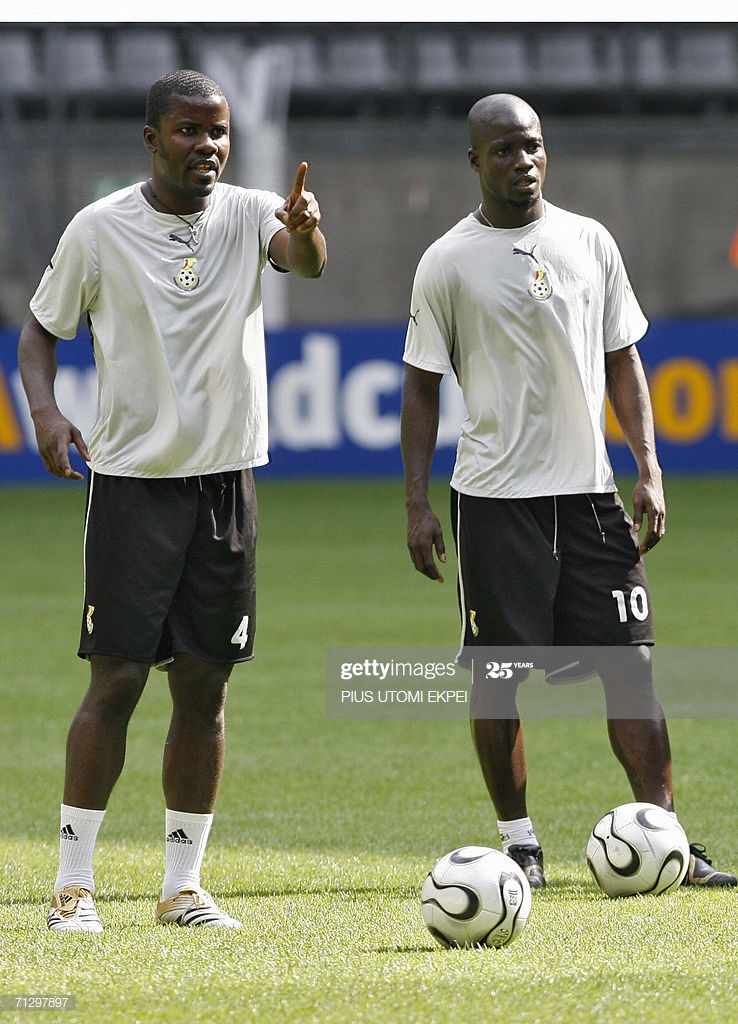 Dortmund, GERMANY: Ghanaian defender Samuel Kuffour (L) takes shots at goal next to skipper Stephen Appiah 26 June, 2006 during their last training session at the Stadium in Dortmund in preparation for their match against Brazilian national team tomorrow in the round of sixteen of the World Cup. AFP PHOTO / PIUS UTOMI EKPEI (Photo credit should read PIUS UTOMI EKPEI/AFP via Getty Images)

Appiah has been hailed over the years for his leadership as captain of the team between 2002 and 2010.

The former Juventus midfielder first took over the armband when Ghana faced Slovenia in a friendly fixture and would go on to lead the team to secure a historic first-time qualification for the World Cup in 2006.

Speaking to Joy Sports Link, Kuffour waxed lyrical over his former Ghana teammate, saying he loved the way he conducted himself as a leader of the team.

“Stephen [Appiah] was the captain. When we qualified to the World Cup in 2006, he never did anything behind me. He showed me respect because I was there before him and honestly, I never thought of being a captain because it is just a band,” Kuffour said.

“You show your leadership on the field of play. Let me give you a scenario here, during the 2014 World Cup, Messi was the captain for Argentina but you could see inspiration came from Mascherano."

“Stephen was a leader, I loved the way he conducted himself in terms of leadership..”

Appiah, who ultimately represented Ghana at two World Cup tournaments (2006 and 2010), the 2004 Olympic Games as well as at the U20 and U17 World Cup championships, also played for Italian sides Udinese, Parma, Brescia, Bologna and Cesena at club level.

He also featured for Turkish side Fenerbahce and Serbian outfit Vojvodina.