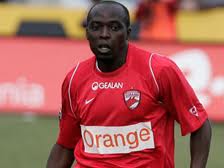 Blay, who can play as a right-back and in central defence, played a total of nine seasons in the Belgian top flight.

Blay then moved to Romania in 2006 by first joining Dinamo Bucarest.

He was a member of the Ghana squad which played at the 2002 Africa Cup of Nations finals in Mali.