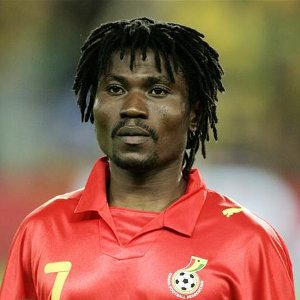 Former Ghana international Laryea Kingston has disclosed that he could have become a boxer if he had not turned a footballer.

Kingston was born in Bukom, Accra, where every kid dream of wearing the gloves one day.

Now 39, the former Heart of Midlothian midfield dynamo has revealed that he was no different as he wanted to become a professional boxer but he instead ended up becoming a footballer.

“Ooh I was born in Bukom and growing up, we all know that Bukom is the home of boxing so I was a naughty boy who was interested in the sport alongside the football," he said on Starr FM.

“So I could have become a boxer if I hadn’t turn a footballer."

Kingston started his career with local side Accra Great Olympics, whom he joined aged 16, before moving to Libyan side Al-Ittihad Tripoli in 2000, on a loan deal.

However, after only four months of this arrangement he returned to Accra, unhappy at his treatment in Tripoli, joining Hearts of Oak in 2001.

He made 41 appearances for the Black Stars, plundering six goals between 2002 and 2010.