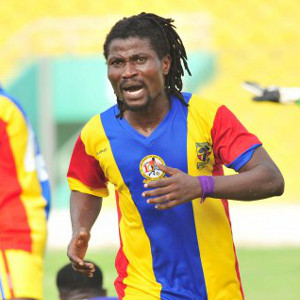 The Phobians are having indifferent start to the campaign but currently occupy 3rd spot on the log with 19 points whiles sworn rivals Asante Kotoko are in 4th position, same points as Hearts but inferior goals difference after 12 games.

WAFA and Aduana Stars have taken the first two spots on the standings following their stupendous display in the campaign thus far.

However, according to the former Hearts of Midlotian attacker, he expects Kotoko and Hearts to stake a claim on the league title come the end of the season.

“Hearts is currently lying third and Kotoko are fourth and we’re almost at the middle of the season and the league is getting very competitive, the ‘smaller’ teams are doing their best but at the end I expect the two heavyweight (Hearts and Kotoko) to be vying for the league title,” Laryea told SportsCrusader.