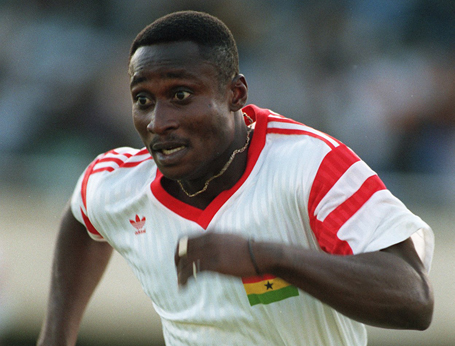 Ex-Ghana striker Anthony Yeboah has reiterated how disquiet in camp cost the country the 1992 Africa Cup of Nations trophy.

The Black Stars were beaten 11-10 on penalties to Côte d'Ivoire in Senegal to miss out on an elusive  fifth continental title.

Yeboah believes the lack of esprit de corps might have contributed to their painful defeat.

''There was also a little bit of misunderstanding in the team,'' the ex-Leeds United star told GTV Sports Plus.

''Yes it is true (That the team was split), because you could see from some of the players.

''The team work wasn't like it supposed to be so I think that cost us a lot.''

Ghana went into the final as overwhelming favourites after some stupendous displays from the start of the competition.

Yeboah also attributes their defeat to the suspension of captain and talisman Abedi Pele.

''We realized we made a lot of mistakes, we were supposed to win the tournament totally because we were much better than the others,'' he said.

''Just petty things we couldn’t do right cost us that trophy but the team we had at that time was fantastic.''