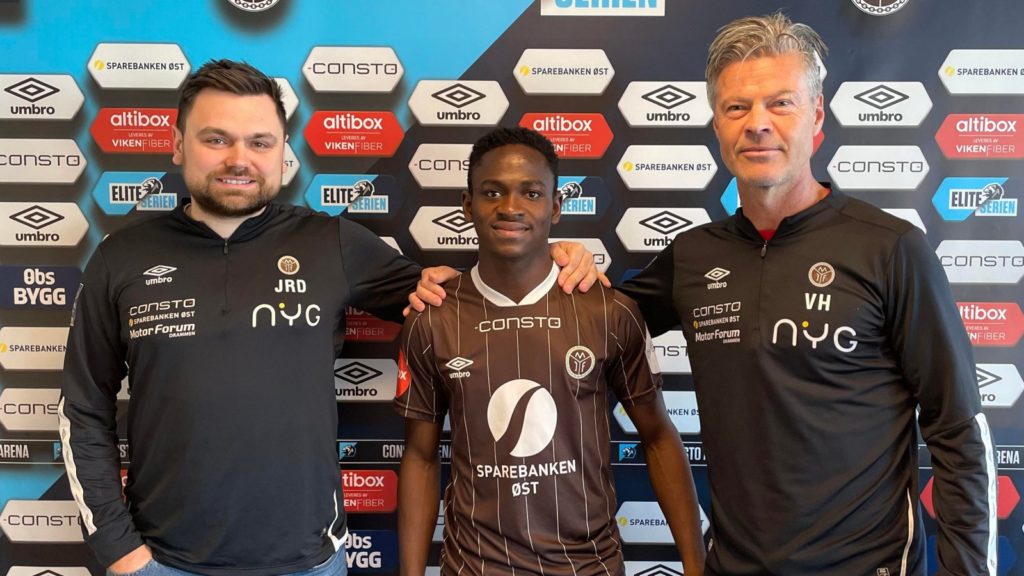 Simon Appiah has joined a club in the Norwegian top-flight

Talented former Ghana U17 star Simon Appiah has completed his move to Norwegian top-flight Mjondalen thanks to the help of former Black Stars goalkeeper Adam Kwarasey, Ghanasoccernet.com can reveal.

The 19-year-old sealed a three-year deal on Wednesday afternoon to complete his move from the Ghanaian league.

He was handed the contract after impressing the club with the club that competes in Eliteserien, the top tier in the Norwegian football league system, after joining them on trial in the Spanish city of Marbella few weeks ago

Appiah moves from the Ghanaian club Liberty Professionals, which plays at the second-highest level after being relegated from the top division last year.

He also has four caps for Ghana's under-17 national team and becomes Mjondalen's fifth signing this winter.

He is the fourth Ghanaian player to have benefited from the contacts of Kwarasey who has set himself the vision of helping players from his home country struggling to find clubs in Europe.

"He impressed us all in training from the first practice when we met him in Marbella," head coach Vegard Hansen said.

"He is nimble, good with the ball, has nice passes and shoots well.

Appiah is a central midfielder and challenges Erik Skistad and his compatriot Isaac Twum for starting places in the team.

Mjondalen's star player Albin Sporrong is a long-term injury, and Hansen says it's nice to bring in another central player in midfield.

"Although Erik and Isaac are first choice now in central midfield, we believe that Simon can challenge them pretty quickly. He still has a bit to learn tactically and needs to get to know Norwegian football as well as the way we play.

"Among other things, we have to teach him zone defense, but I don't disregard the fact that he will be watching the field pretty quickly this spring," the head coach said.

Appiah has signed a deal with the Browns until the end of the 2024 season.

He is the latest player to be helped by Kwarasey with more players set to sign for clubs in Norway before their transfer window shuts.