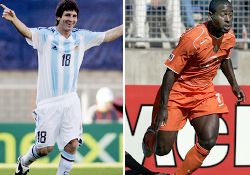 Former Arsenal winger Quincy Owusu-Abeyie is baffled by his failure to reach his potential as he recounted his best days with the Dutch U20 team at the 2005 FIFA World Youth Championship which featured Lionel Messi.

Owusu-Abeyie and Messi were the names that resonated loudly on the lips of every football fan across the world ahead of the youth tournament in the Netherlands.

But it was the Argentine wizard who emerged the best player of the championship after hitting six goals to help the South American giants clinch the trophy.

The now 33-year-old was quizzed why he was beaten to the Golden Ball award at the tournament by Messi.

"Yes, and look where we are each now ...", the footballer replied in a friendly way.

"Ufff ... Well, imagine what I asked myself. I still dream of that moment, of that tournament, today. There I played like never before, it was my best version I hope some day to play like this continuously. Why didn't I stay the same? It is not easy, it is not easy to answer ... I still trust that one day I will try to climb and return to that level,” he told Besoccer.

Owusu-Abeyie had a decent career playing for the likes of Arsenal, Malaga, Celta Vigo, Panathinaikos and Crystal Palace.

In January 2007, the tricky wideman switched his nationality to Ghana after failing to earn a call-up into the senior Dutch national team.

He played for Ghana at the 2010 FIFA World Cup in South Africa as the Black Stars reached the quarterfinals stage.