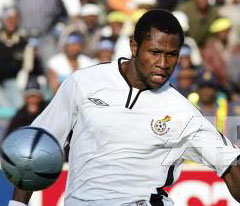 Ex-Asante Kotoko defender Issah Ahmed says heâ€™s frustrated at the continual snub of his former club to re-sign him.

The 29-year-old is still without a job after he was released by Randers FC after spending four years with the Danish top flight side.

He has since not hidden his intention to re-launch his career with his boyhood club but delay in formalizing his desire is putting him on the edge.

The centre-back claims officials of the Kumasi-based club are dragging their feet on signing him on despite making himself available.

â€œI have made numerous overtures to the club but I have not been told anything as we speak. Itâ€™s becoming frustratingâ€ Ahmed is quoted as saying

â€œI am desirous of joining Kotoko because I have a lot of football in me and believe can contribute significantly to the ambitions of the team next season.

Ahmed was one of three local Ghana based players at the 2006 FifaÂ World CupÂ finals.