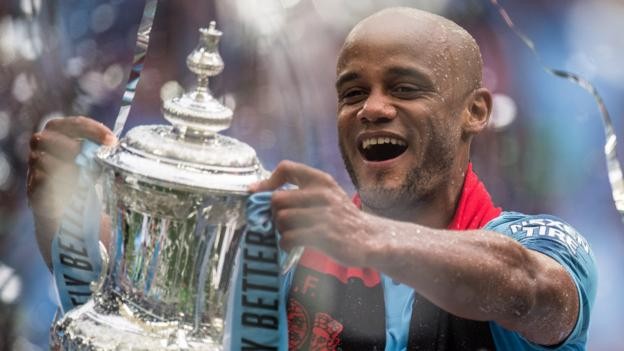 This comes after the influential defender on Sunday revealed his decision to leave Manchester City after 11 years at the English Premier League champions.

Anderlecht, the club where he trained since he was a child, quickly revealed on Sunday that they have reached an agreement for the defender to return to the club as a player-coach.

This means he will be coaching Ghanaians at the club - Dennis Appiah, Jeremy Doku and Francis Amuzu as well as Dauda Mohammed who will be returning from his loan stint in Holland.

Kompany, who is thought of as a hugely influential figure among young players, is likely to mould the talented Ghanaian players into world class stars as he takes charge of the giants.

The new coach is expected to revive the club after struggling badly this season with some dismal results.

Kompany revealed on Sunday morning that he will leave Manchester City after Saturday's FA Cup final win over Watford.

By beating Watford 6-0 at Wembley, City became the first men's side to complete the domestic treble in England.

In an open letter on Facebook, Kompany said it "doesn't feel real".

"Countless of times have I imagined this day," he said. "After all, the end has felt nearby for so many years.

"Man City has given me everything. I've tried to give back as much as I possibly could. The time has come for me to go now," Kompany said.

Belgium centre-back Kompany joined City from Hamburg as a defensive midfielder in 2008 and was named club captain three years later.

He scored his final goal against Leicester on 6 May, a brilliant strike from 25 yards that took City to within one win of the Premier League title, which they sealed on the final day of the season with victory at Brighton.

After the 1-0 win over Leicester - City's final home game of the season - he was in tears as the team enjoyed a lap of honour.

In September, the club will hold his testimonial match, from which he will donate all profits to Manchester's homeless.