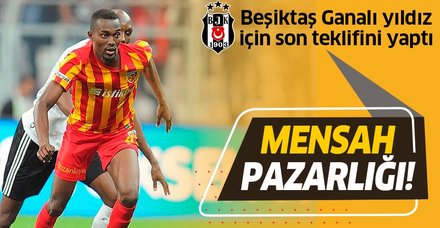 Kayserispor could give in to Bekistas’ transfer demands if they follow through on their proposal of exchanging two players-plus-cash deal for want-away midfielder Bernard Mensah, GHANAsoccernet.com can exclusively report.

Mensah is eager to part ways with the club after growing frustrated over the lack of financial entitlement.

The 25-year-old joined the Blood and Gold outfit on a three-year deal in the summer but the financial situation of the club has muddied waters.

The Ghana midfielder has been linked with a move to giants Fenerbahce and Galatasaray but it seems Besiktas could steal a march on the two clubs after offering a sumptuous package for the player.

Besiktas are willing to offer two of their players (Tyler Boyd and Orkan Çınar) alongside a €3.5 million cash in exchange for the attacking midfielder in the forthcoming January transfer window.

The Black and Whites are desperate to hand coach Abdullah Avci his main transfer target in order to find some consistent form in the second half of the season.

Mensah has registered 4 assists in 13 games for Kayserispor this term.