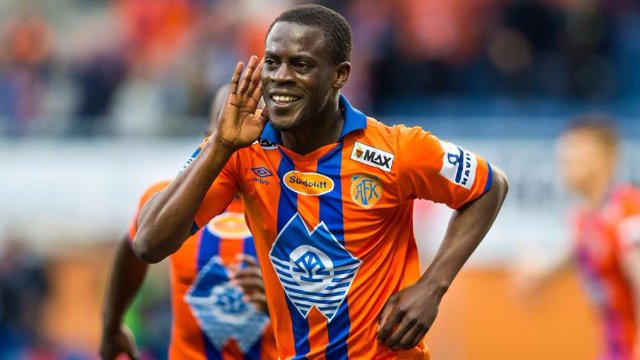 The English Championship side have inquired about the availability of the highly-rated wideman.

The reputation of the 26-year-old has skyrocketed after he earned his debut call up into the Ghana National team.

The pacy forward has enjoyed an incredible run in the Norwegian top-flight to attract the lenses of the English side.

GHANAsoccernet.com can reveal that top officials of the Royals have contacted the Ghanaian over a possible switch.

Gyasi, who is also being tracked by Aston Villa, could be an interesting addition.

The Royals have not had the best of start in the Championship this term, with a mixed batch of results overall so far.

And Manager Jaap Stamp, who led the side to the Championship playoffs last season is already under pressure to extricate their poor form and it appears the Ghanaian will fit the bill.

Top sources have told Ghana's leading football website, GHANAsoccernet.com that the struggling Berkshire-based side are keen to bring the hugely talented winger to the Madejski stadium before the transfer window shuts on Thursday.

It’s unclear how the dynamics will play out with the player who is expected to be fully involved in Ghana's 2018 World Cup qualifier against Congo in a spate of seven days.

Ghana coach Kwesi Appiah has handed a debut call up to the highly -rated Dutch-born wideman ahead of the double header against the Red Devils of Congo.