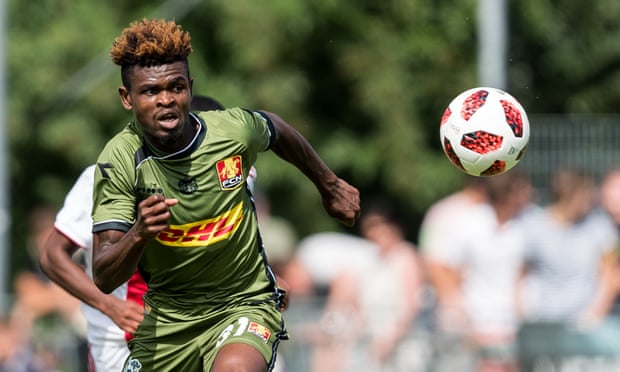 Godsway Donyoh graduated from the Right to Dream academy in 2013 and is now playing for FC Nordsjaelland.

FC Nordsjaelland coach Flemming Padersen says midfielder Godsway Donyoh is being courted by clubs but it is up to the Ghanaian to decide his future.

The 25-year-old was a key cog for the Wild Tigers but persistent injuries has seen him lose his place in the starting line up.

He has however been linked with a move away from the club in the ongoing transfer window as he seeks regular playing time.

Ghanasoccernet.com can exclusively reveal that German side Dynamo Dresden is the club leading the chase to sign the Ghanaian striker.

According to the Right to Dream Park outfit chief, they have received several offers for the Ghanaian but though they are not willing to lose any player in the winter transfer window, it is up to the former Manchester City midfielder to decided his future.

"It really depends on whether Godsway, which has some options, chooses to leave," says Flemming Pedersen to tipsbladet.dk.

"When Godsway is best, he is in the starting lineup for us. He also came on the field in the last match against FCK in the fall, where he came in from the bench and scored. It was a good deal. The form was getting there, and he was considering a place in the starting lineup in Aalborg. But then he noticed something in the back and announced the fight. We could understand that well, and we backed that up."

Donyoh made 6 appearances in the first half of the season, scoring 1 goal and tallying 1 assist.