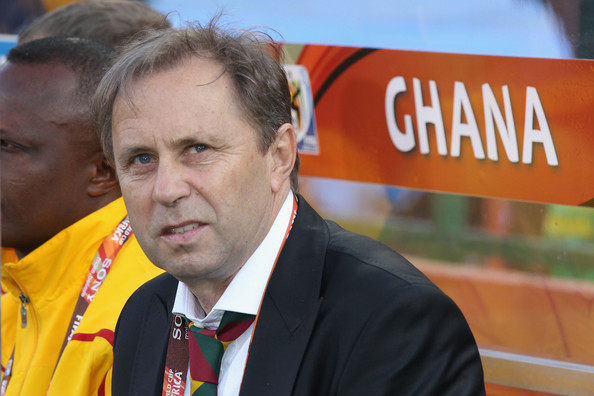 Milovan Rajevac is the preferred choice in a three-man shortlist to become the head coach of Benin just days after he was contacted to join Ghana's backroom staff for the 2014 World Cup, GHANAsoccernet.com can exclusively reveal.

The Serbian trainer and two others - Didier Olle-Nicolle and Hubert Velud - were drawn from a list of twenty (20) applicants gunning to become the new coach of the Squirrels.

This news comes just within days after the 60-year-old was asked by Ghana coach Kwesi Appiah to consider the possibility of joining his backroom staff for the 2014 World Cup in Brazil.

Rajevac's name and CV amongst that of his two other competitors for the job have been forwarded to the Benin Sports Ministry for further consideration after they were shortlisted by the Benin FA's (FBF) Executive Committee.

President of the Benin FAÂ Augustine AhouanvoÃ©bla says the the association's preference amongst the shortlisted three is the former Black Stars coach but the appointment of the Serbian - expected next week - is being made difficult due to his exorbitant wage demand.

"The desire of the Fbf is that we entrust our national team to Serbian Milovan Rajevac but our resources are limited,"Â AhouanvoÃ©bla revealed.

Rajevac is best remembered for his impressive work while coaching the Black Stars between 2008-2010.

He guided Ghana to the finals of the 2010 Nations Cup before almost leading the side to a semi final finish at the World Cup months later.

Subsequent stints with Saudi Arabian club Al-Ahli and with the Qatar national team proved unsuccessful for the Serbia who is currently unemployed.

RajevacÂ was linked with a return to the Black Stars team after being approached by coach Kwesi Appiah to consider the possibility of taking up an advisory role within his backroom technical staff for the 2014 World Cup in Brazil.