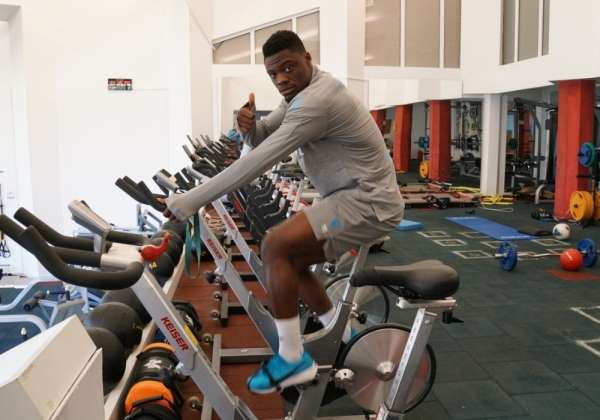 Ghana striker Caleb Ekuban has returned to Turkish side Tranzonspor and started training after completing his injury treatment in Italy, Ghanasoccernet.com can exclusively reveal.

The 25-year-old started fitness training on Monday at the club's gym after recovering from the injury that has kept him out of action for two months.

Ekuban, who was part of Ghana's squad for the 2019 Africa Cup of Nations in June, spent the past two months in Italy undergoing expert treatment for a broken bone.

He picked up the injury in training after breaking a bone in his left foot following a challenge by his team-mate Ivanildo Fernandes in September.

But following the successful treatment in Italy, he has now regained his fitness and returned to the club to start training with the burgundy-blue under the supervision of a doctor.

The club doctor Hakan Ayaz supervised the Ghana star as he walked, jogged and rode the static bicycle at the club's gym.

The in-form forward, who has scored five in seven games already this season will missed the games against Gençlerbirligi, Getafe in the Europa League, Sivasspor and Besiktas.

He was not called by Ghana coach Kwesi Appiah for this week's Africa Cup of Nations qualifying matches against South Africa and Sao Tome & Principe because of the injury.

Ekuban has been a key player for Tranzonspor since joining from English Championship side Leeds United.

Ekuban has been a key cog in the Trabzonspor set up in the early stages of the season, bagging in five goals in seven games as the Trabzon based club qualified to the groups stages of the Europa League.

Trabzonspor are having a good start to the season as they lie third in the Turkish Super Lig table but the return of the attacker will be a huge boost for the club.