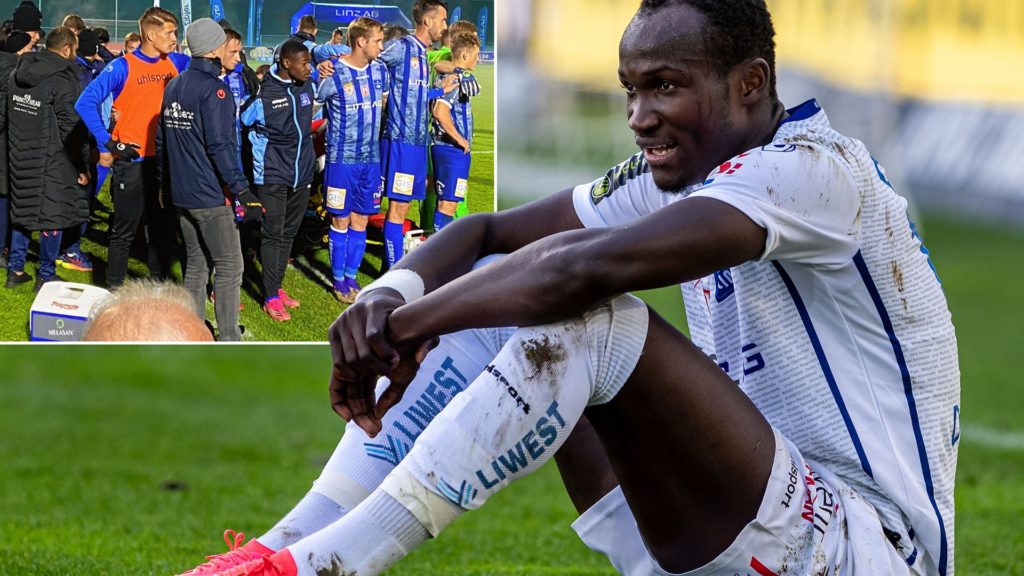 Ghana striker Raphael Dwamena says he wants to continue his career as a professional footballer despite a heart scare that forced a match in Austria FA Cup to be postponed, Ghanasoccernet.com can exclusively reveal.

The BW Linz attacker, who has a long standing heart problem and suffered the cardiac arrest during the OFB Cup round of 16 clash with TSV Hartberg two weeks ago, has spoken for the first time since the incident that brought the European country's football to a standstill.

The 26-year-old denied that his life was in danger despite the heart scare that brought his team-mates and opponents close to tears after medical staff and ambulances rushed to rescue the Ghana international. (See top-left corner of the picture above.)

Dwamena, who has been playing with an implanted defibrillator since 2020, collapsed on the sidelines in the 20th minute during the OFB Cup round of 16 against Hartberg.

The attacker suddenly grabbed his chest during the game on October 27 and later collapsed screaming near the substitutes' bench. The game was finally canceled after a brief interruption.

The 26-year-old has spoken for the first time about the terrible scenes. "I received an electric shock from the defibrillator. It hurts and knocks you off your feet. But I didn't collapse," remembers Dwamena.

Despite the scary scenes, one thing that is clear for Dwamena is for his professional career to continue.

"I want to have another check done in the next few days or weeks. If everything is okay, I'll be back on the pitch and play. I've always played without any problems," the striker said.

Dwamena is aware that his future career also depends on the opinion of doctors. For a continuation of his career the green light of the doctors and his association is necessary.

"Now there has just been an incident. But I can't do it myself decide," Dwamena admits after being pressed about the role of medical experts in the future of his playing career even though reluctantly.

Cardiac arrhythmias prevented Dwamena from having a bigger football career before. Before moving to the second division in Austria in the summer, Linz had the player checked thoroughly at AKH Linz one of the best heart treatment facilities in Europe, according to manager Stefan Reiter.

The Ghanaians' cardiac arrhythmias have been known for a long time. The former top striker from Austria Lustenau (22 games, 21 goals) once had a million-dollar transfer to Brighton in the Premier League. However, at the medical check-up, heart problems were diagnosed.

Nevertheless, Dwamena managed a 6 million euro transfer to UD Levante via FC Zurich. Due to heart problems, Dwamena had to take regular breaks from loan club Real Zaragoza, and his defibrillator hit there too - and after all, he ended up in Austria's second division again in the summer. Before signing his contract in Linz, the club had Dwamena checked - without any abnormalities.

According to the doctors, the kicker was never in acute danger to life - thanks to the defibrillator. "His 'Defi' intervened a total of four times," said BW Linz sports director Tino Wawra.