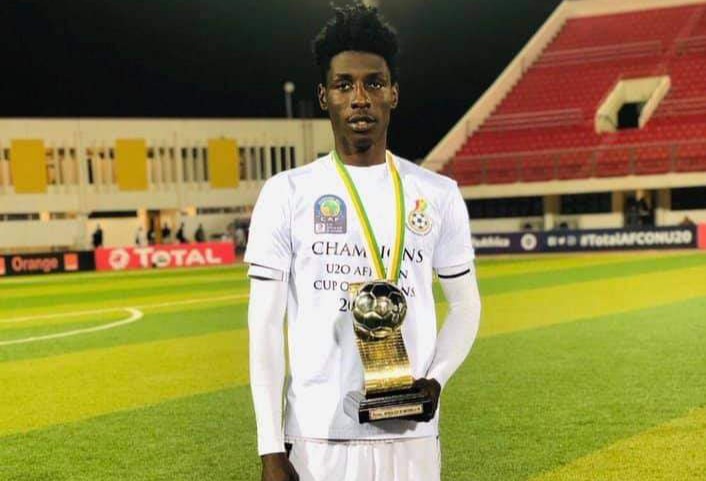 Like most young Ghanaian footballers, HB Koge starlet Frank Assinki always dreamed of representing his country at a major tournament - and at the tender age of 19, the emerging superstar has achieved that with the Ghana U20 but still looking at playing for the senior national team, the Black Stars.

Assinki played a key role in Ghana's roaring success at the Africa U20 Championship in Mauritania in March this year where they clinched the ultimate.

His presence in the Black Satellite defence was a major contributor to the team's success in Mauritania.

In an exclusive interview with the GHANAsoccernet.com, Assinki has opened up on his career thus far, his expectations and aims as an upcoming star.

He has been on loan at Danish third-tier side Roskilde KFUM where he joined in February 2021 from mother club Koge.

Assinki moved from Ghana Premier League side Inter Allies FC to Koge in August 2020 after an impressive spell.

How has the journey to becoming a football player been like?

Becoming a footballer from infancy has been really tough for me. It all started when I was a "ball boy" for a team in my community called Monaco. I used to carry their balls always when they are going to train or for a match. That's how I fell inlove with the game. The journey hasn't been that easy.

What influenced your decision to become a football player?

I started playing football when I was 7 years old. By then I knew nothing about football. I used to play "gutter to gutter" football. People who watched me play told to me take football serious because I am good. I started to believe in myself that I can make it. At the time, there were no football equipment whatsoever so it wasn't that easy for me.

How was the feeling when you were first promoted to the first team at Inter Allies FC?

I started from colts. That's from the U17 level. I also played in the 3rd and 2nd divisions in my community. Through hardwork and determination I had the chance to join Inter Allies FC. I joined the youth team before getting promotion to the first team. I was excited and proud because I nearly gave up to playing football at some point.

Ahead of your first Ghana Premier League match, what went through your mind?

There were a whole lot of things going through my mind ahead of my Ghana Premier League debut. I didn't play at my position in that game, it was against Karela United. I came on in the second half to play at right back. I had self believe before entering the field. It was time for me to showcase my talent. It was hard but with determination, I made it simple even though I was played out of position.

What inspired your outstanding performances in the Ghana league?

In my community there was no one playing in the Ghana Premier League. They were all playing in the lower divisions and I was the only one to be in the top division so I made it a point that I have to prove myself at Inter Allies for the believe they had in me. I had to make them know more of me. I watched some league matches on TV and that encouraged me I can do it and thanks to God I have been able to make it.

After an impressive season with Inter Allies, you moved to HB Koge in Denmark. Did you anticipate such a move?

I never expected something like that especially in only my first season in the top-flight. We had some trials in the presence of some European scouts and here am I with them in Denmark. After the trials, I was among four players who were selected after the scouts were really impressed with our display. I wasn't 18 years then so they told me they will come for me. From there I had the feelings to work extra hard because for these scouts to be interested in me then I am a good player. That motivated me to keep on with hard work since I knew I would join them soon.

You were man of the match in your first HB Koge game. What is the secret?

Winning the man of the match award on my HB Koge debut was a result of self belief. I made my mind up that so far I am a footballer I would definitely meet a lot of people and whenever that happens I shouldn't panic. I see every footballer as myself. I did what was expected of me and ended up with the man of the match award. I was so proud because it my first time playing with European talents.

Did you ever have vivid dreams about playing for the national team at any level?

As a footballer, it's always a dream to play for the national team which doesn't come easy but I believe through hardwork and determination you can be there. To be part of the U20 or any of the national teams is not easy to get since there are many Ghanaian footballers out there also dreaming of it. When you get the opportunity you must make good use of it. I was excited to join the national team for the first time because it's something I have always dreamed of.

How did you receive your Ghana U20 invitation for the Africa Cup of Nations in Mauritania?

I wasn't surprised when I received my Ghana U20 call-up for the Africa Cup of Nations because I had been there before in the U17 team but things didn't work out and I was dropped before the WAFU tournament in Niger. I had the believe I could be called again because with my hardwork and perseverance I was always ready for it. And since I have been there before I know the dos and don'ts when in camp. I joined the U20 team and things went successfully.

How would you rate yourself in the tournament in Mauritania?

Many people believe you are ready for the Black Stars. What are your thoughts about that?

Each and every player will be glad and honoured to be called to the Black Stars but that depends on your performance. If I get the opportunity to play for the Black Stars, I will be so proud of myself. I am really ready for it. Even joining at the bench will let me feel the atmosphere and learn from those who are there already. I am not in any rush for a Black Stars invitation. I know there is time for everything.

Who is the sports icon that has influenced you the most?

I always look up to Celta Vigo defender Joseph Aidoo. He is my icon. I have not met or spoken to him before but I keep watching him to learn a lot of things.

At what level do you want to take your footballing career to?

Football is a daily routine which goes with age. This is my time and I can't really tell where I will end up. I would love to play in England, Spain or Germany which is my dream but if I don't get the chance in of these countries, I will just keep working hard and wherever I will find myself and it favours me that's fine. I will give my all to ensure I'm successful.

Assinki has been called to the Ghana U23 team for upcoming international friendlies in June.