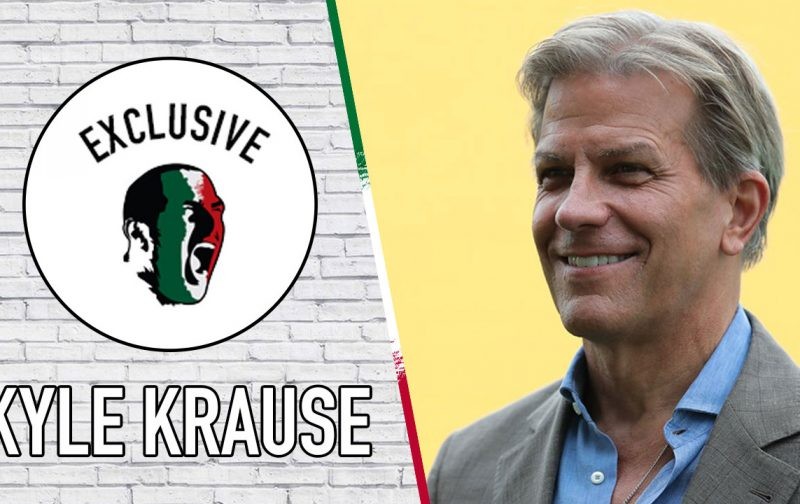 When Parma were declared bankrupt in 2015 and were forced to start from scratch, the idea of seeing the Crociati in Serie A seemed no more than a pipe dream.

The provincial club that burst into the elite in the 1990s, upsetting Italy and Europe’s traditional powerhouses by lifting Coppa Italia titles, European trophies and challenging for the Scudetto were no more.

Not for the first time, the club faced a rebirth. A group of local investors came together, reformed Parma and had one goal – to have Serie A football back at the Stadio Ennio Tardini.

They succeeded as quickly as was possible, chaining together an unprecedented three consecutive promotions to reach the top tier where, for two years since, their objective has been to survive.

“That objective is different to our objective,” new president Kyle Krause told Forza Italian Football, just days after completing his purchase of a 90 percent share in the club through Krause Group. “Certainly we want to maintain the position in Serie A, no doubt about that.

“But longer term to build what we’re trying to do [it] can involve risks and a different type of decision making. You’ll see that kind of change.

“I think what we’ll see now is the opportunity for quicker decision making because you’ve got a majority owner.

“Our partners are fantastic and they’ve done a lot of great things, but it can be difficult when you’ve got eight people collectively trying to make decisions. So I think we’ll see more nimble decision making and also the ability to invest for a longer-term time.”

Those partners, whom Krause has branded as “heroes” for saving the club and a huge part of the city’s identity aren’t now completely out of the picture though, as they’ve maintained a share and exist in a support role that the new majority owner knows to look to for guidance.

“I’m thrilled to have them in a support role and they couldn’t be more supportive,” the American explained. “They’ve been fantastic, helpful and they have a passion.

“They did it because of their passion for the city of Parma and some of them have a true passion for Parma Calcio. So I think for them there are probably mixed emotions in going from majority to minority ownership.

“I’m not that smart but I’m smart enough to know that I want their partnership to continue to bring success to Parma Calcio.

“They took us on a journey to where we are today and I want to continue that journey with their support to take it into the future.” That future under Krause Group appears, at these very early stages, to be long. Krause himself has ambitions of taking the club “back to where they deserve to be”, but he knows that the transition from being a club focused on survival to being one competing for European qualification isn’t as straightforward as some might suggest.

“I truly don’t want to set unrealistic expectations,” he responded when asked where the next few seasons would take the Gialloblu and if Europe was something to be expected.

“We have enough change going on that I think five years [to be back in Europe] is aggressive and that’s always hard to say as a competitive person because you always want to be there.

“I’d love to be there but it’ll probably take longer than that.”

Italy is something that has always been part of Krause’s life. His mother’s family descend from Sicily, he got engaged to and married his wife Sharon in Italy, has taken family holidays here and even has other business interests in the country already, including two wineries in Piemonte.

“My bias in my family history has always been towards the Italian side,” he explained. “I’ve always embraced and enjoyed everything Italian.

“I have companies in America with Italian words as their names. Italy has always been a part of my life.

“I also have a passion for football so the opportunity between calcio and Italy is, I’ve said that it’s a dream, but also a passion on both sides.”

That passion was once centred around another Italian club though, but Krause insists that his affection for Juventus is something that has been left behind him now.

“I was [a Juventus fan],” he said, emphasising his speaking in a past tense, “I have to say I was.

“Previously in my life I was a Juve fan and my family are from Palermo, so Palermo would have been my second team. That’s where my bias had been.”

Upon completing his purchase of the Crociati, Krause posted a video to Twitter that saw him remove an old Juventus sticker before replacing it with a Parma crest.

“That’s my laptop,” he said, “and it’s got a few stickers on it that go back to my Italian bias with a few different Italian brands.

“A few days before the deal I had the opportunity to go to our shop at the Tardini. I bought the little sticker pack that you’d buy for your child with the hope that maybe we’d get the deal done and then I’d have this opportunity.

“So when we did the deal with our partners and I was lucky enough to become majority owner, at that moment, instead of a handshake because of these COVID moments, the deal clincher was that I took the Juve sticker off my laptop and applied the Parma Calcio sticker.

“It happened in the moment. It was a different version of the handshake.

“It might have looked more like a staged thing, but if you watch it I’m painfully taking the sticker off and if it had been staged it would have gone a little smoother than that.

“It was in the moment. I had the sticker with me just in case we got the transaction done and I could make that change of allegiance.”

Given his ties to both Piemonte and Sicily, supporters and locals have been wondering what it was about Parma that made him decide to invest in the Gialloblu.

“How I got to Parma was really a collection of things,” the president began, “I started to get more earnest and smarter on the business of calcio and as I was doing that I hoped, someday, to have the opportunity of owning a team here. I didn’t know if it’d be in Serie A or at what level.

“That investigation brought me to the realisation that there are different opportunities and there are teams who may be available. As I was looking into it, the Parma Calcio opportunity presented itself.

“For me, it was my first choice of what was out there because they’ve got a great history here from a football standpoint.

“Parma from the 90s give us that great base, Parma’s a great city and I think we’ve got a fanbase that we can work with to hopefully do great things for Parma Calcio.

“There are a hundred more reasons, but it was a case of right team, right city for me to have passion towards the team.

“It’s not a business transaction. You give up the team that you follow for the new team and it’s not just because you’re doing it to make a buck or whatever. This is what I want to support.” The deal to come in in Emlia-Romagna saw Krause become the fifth North American owner in Serie A, and he’s already been in touch with fellow American Rocco Commisso at Fiorentina as well as Bologna’s Canadian patron Joey Saputo.

“Both of those helped me along my learning journey, which wasn’t that long,” the Iowa native continued.

“They gave me some advice. The reason I only reached out to those two is because I had some business connections and a way to get to them easily.

“I’m sure I could reach out to other American owners tomorrow and they’d take my call, but just in this flurry of activity those were the two [I got in touch with].

“They couldn’t have been more helpful. They were fantastic and they shot me supportive emails as we completed the deal last week.

“It’s not just the Americans. It’s not an exclusive North American brotherhood, I’m looking forward to meeting other owners from all over the world and predominantly the Italians. I want to meet all of them and I will quickly.”

Commisso, in particular, has had his fair share of frustrations since arriving at the Stadio Artemio Franchi and hasn’t been shy in bemoaning the complications around upgrading and modernising a stadium in Italy.

Krause, though, is more optimistic of redeveloping the Tardini and he has already had conversations with the city’s mayor Federico Pizzarotti.

“I’ll say in Pizzarotti’s defence that meeting and getting the stadium done are two different things,” he said, laughing.

“But he couldn’t have been more supportive. It’s fun that his and Parma’s deputy mayor is one fo the Boys who sits in the Curva Nord so we don’t have to explain the game to them. “With these stadium construction projects, it doesn’t matter where you are in the world, they’re complicated.

“It’s a city and football situation. But it’s a community situation in terms of what happens to the neighbourhood and there’s cost consideration in that these things aren’t inexpensive to do.

“So you have to weigh things up to make it happen. But to be able to take an interesting structure at the Tardini and modernise it is just what has to happen.

“It’s the same thing that Rocco is saying at Fiorentina, it has to happen. You can’t really just not do it.

“If you look at Serie A as a whole, you have the Allianz Stadium as one of the only really updated stadiums.

“But the good news is that there are a lot of projects happening like Atalanta, Bologna, Cagliari, Roma, the Milan clubs, us, Fiorentina and whatever I’m not thinking of.

“In my opinion, they’re all going to happen and then we’ll have more than half of the league playing in new, updated stadiums and that’ll just raise football collectively and work towards getting us back to being the No.1 league in the world.”

For now, though, Krause is focused on getting a number of incoming transfer deals over the line, some of which he’s hoping can be completed before Monday’s game away at Bologna.

Admittedly disappointed that he wasn’t able to celebrate his first game in charge with a win over Napoli on Sunday, Krause is hopeful that, in the absence of Joey Saputo at the Stadio Renato Dall’Ara on Monday, he can see his side take three points back to Parma before he leaves Italy on Tuesday.

“I was exchanging emails with Joey and he’s not going to be at the game on Monday,” he joked, “I am so it’s only fair that we get the win.”

The post Exclusive interview with Kyle Krause: Parma is the right city, the right club, it's not a business transaction, it's what I want to support first appeared on Forza Italian Football.