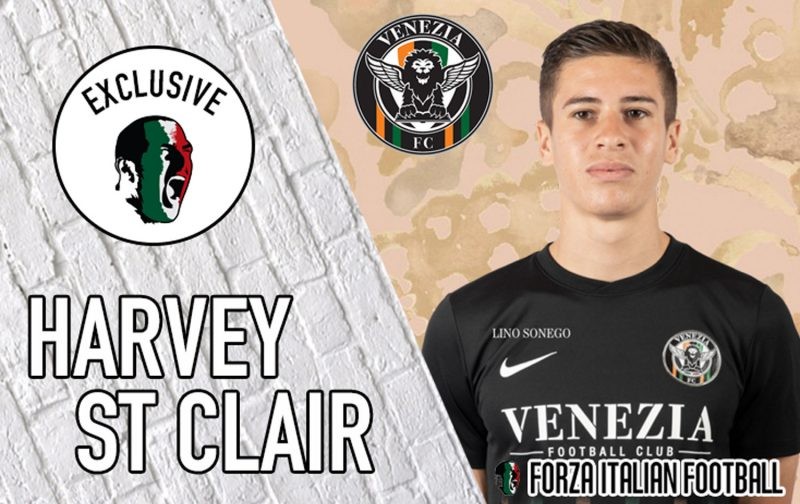 Venezia secured a place in next season’s Serie B with a dramatic last day win, ad after some ups and downs in the campaign, youngster Harvey St Clair believes the club can look at a bright future and dream of Serie A.

The 20-year-old moved to Italy last August, joining Venezia after turning down another contract with boyhood club Chelsea. Looking for more first team football and a new challenge, and with 12 appearances and two assists to his name in this Serie B season things have seemingly gone the right way.

His departure from Chelsea was dictated by the will to be challenged by first team football, and he believes the current crop of academy graduates at Stamford Bridge have what it takes to make an impression at the top level, and thinks Maurizio Sarri could have given them more space in the Blues’ first team.

Forza Italian Football sat down with the Under 21 Scotland international, who spoke about his first season in Italy, the new lifestyle, his ambitions, his idol growing up and the academy situation at Chelsea.

How has the new challenge in Italy been?

Is it how you expected it to be? Would you make the same decision again in hindsight?

Would you make the same decision to move to Italy again in hindsight?

“Yes, most definitely. I feel I’ve made the right decision [to move to Italy and to Venezia]. I would definitely make this decision again.”?

What kind of things have you learned, that maybe you wouldn’t have if you stayed at Chelsea?

“On the pitch I’ve learnt a lot of tactical things off the ball, and more the Italian way of playing. The defending, the positioning. Just being in that first team environment, play for the three points every week. The training, the playing… It feels more real because it’s ‘men’s football’.”

How about the lifestyle? What do you like about the Italian way of life? Do you have white wine for breakfast like all Venetians?

“No, no, I stay away from the wine. The lifestyle is really good. I enjoy learning a new language, Italian. I love the weather. It’s really nice here. I also live on my own, so I feel more responsible, definitely more independent.”

A final day win, a crazy one at that, helped keep Venezia in Serie B? What was the feeling like??

“I feel liked everything evened up now. We’ve had a difficult season, but also a good season. the ending was the icing on the cake. It was an amazing feeling to finally know that we’re safe and that we’re going to be in Serie B next season. It’s really good for everyone at the club and it makes me really happy.”

Do you think you’ll be playing in Serie B with Venezia next season as well?

“I’ve got a contract with Venezia, I’m a Venezia player. I’m sure I’ll be here.”

What do you think of all the crazy stuff happening in Serie B at a political level?

“It would be strange not to be thinking about it. We’re still working hard and staying ready in case we have to play the playouts. I’m not too sure about the ins and outs of what is going on in the league, I’m just doing my own job. I’ll leave it down to the more intelligent people who understand what is going on. We would be confident if we had to play anyway, but it is nice to know there’s no more playouts to face. We’ll have some time off and we’ll go straight back into it next season.

Looking to the future, many would expect that you go back to the UK at some point, but have you had thoughts about a long term future in Italy. Playing in Serie A, joining one of the Italian giants?

“Obviously I have dreams, like everyone. I just take one day at a time, just focussed on the next training session and the next game, trying to improve myself every day, learning from the experienced players in the team, just trying to better myself every day and taking one step at a time. I don’t look too far ahead, I just tackle what’s in front of me.”

What team do you support in Serie A? Where would you prefer to play if your dreams came true?

“I don’t really have a preferred team. I’m just focussing on playing in Serie B at the moment. Trying to get more game time, assists and goals in Serie B, and we’ll see what happens.”

Who do you think is the best player in Serie A or who do you look up to?

“I like to watch [Federico] Chiesa of Fiorentina. He’s quite a lively player and I like his playing style. He’s a good player.”

?Your footballing inspiration/idol growing up?

“There’s so many good players… When I was young I used to watch Match of the Day all the time, and it would always be [Cristiano] Ronaldo who stole the show. Being so skilful and scoring so many goals… He was probably my main idol growing up.”

What do you think of Chelsea’s season under Sarri?

“I’ve been following their season, and they finished third, have got Champions League next season, so they’ve had a good season. I’m happy to see some of my old team mates playing and getting some minutes in the first team – I think they deserve it. I’m happy to see some youngsters playing. It’s good that some are getting a chance now.

Do you think youngsters at Chelsea should be getting more playing time?

“Yes, definitely. I feel there’s enough talent in the academy. It’s just a case of opportunity. There’s a lot of talented players and I’m sure they’ve got what it takes to play at that level.”

Do you think you would have had more playing time had you stayed???

Would you return to Chelsea given a chance to play first team football?

“My focus is just at Venezia at the moment.”

Do you think you could raise the bar at Venezia next season and challenge for promotion to Serie A?

“Definitely. I think we’ve got a good squad, a great coach. I see no reason why not. We should aim our goals high and see where we get to. We’ll take one game at a time, and give it everything we have.”