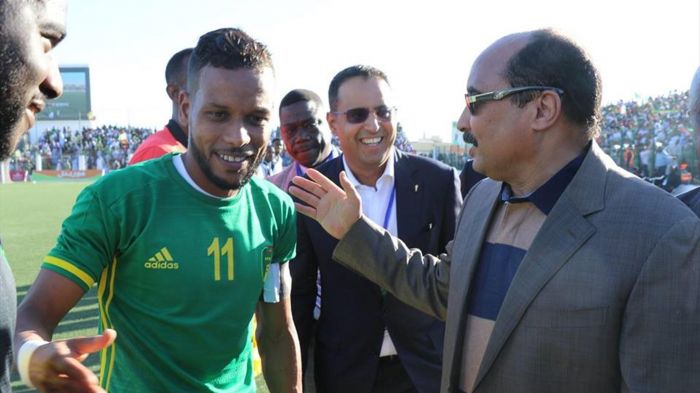 The President of Mauritania Mohamed Ould Abdelaziz will arrive in Egypt on Monday afternoon to watch the country's first ever match at the Africa Cup of Nations, Ghanasoccernet.com can exclusively reveal.

The leader, who is credited for the massive recent development of football in the country, will arrive in Cairo to watch their first match against Mali in Group E.

He will then travel by road to the city of Suez to watch the country first ever match in Africa's flagship football competition.

Mauritania are making their historic first appearance at the tournament after their shock qualification after years of developing the game at the grassroots level.

"Mauritanian President Mohamed Ould Abdel Aziz will be present in the stands today to support the team in the match Mali. The support of the President will give players a great motivation in the team's first AFCON match," Mauritania FA president President Ahmed Yahya told Ghanasoccernet.com on Monday.

Yahya who has been responsible for the rise of the Murabitoun following his astute management of the country's FA thanks to the injection of his own money to support activities of the federation.

The fishing magnate has also credited government for the rise of the team insisting the federation has also received support for President Abdel Aziz for them to carry out their programmes.

The Mauritanians play in Group E, which includes Tunisia, Angola and Mali.

President Ould Abdelaziz, who has worked to reorganize the Mauritian national army, is stepping down from in his post in the coming days following yesterday's Presidential elections.

The ardent football fan has succeeded in securing his country’s borders in the rather problematic Sahel region and has sparked football activities in the country to divert the attention of the youth from violence.

President Abdelaziz who is coming to the end of his tenure is taking stock of his achievements in the ten years he has been in office including the field of sport.