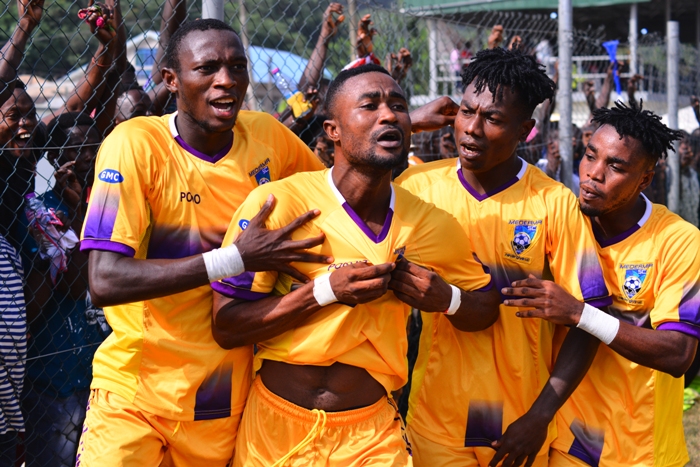 Medeama are closing in on sealing a ground-breaking sponsorship deal with mining giants Goldfields - Tarkwa and Damang which will be the most lucrative in football history in Ghana, GHANAsoccernet.com can exclusively report.

Despite ending its association with betting firm Betway, the Mauve and Yellows have become a huge commercial draw in the West African nation after an explosive start to the 2019/20 Ghana Premier League campaign.

They will overtake the commercial gap on their competitors if the new deal is announced in the coming days, GHANAsoccernet.com can report.

Medeama president Moses Armah and board chairman Toni Aubynn have held advanced talks with senior representatives of Goldfields including the outstanding  Executive Vice President and Head of GoldFields in West Africa, Alfred Baku to tie the deal.

Goldfields will take over as the principal sponsor of the two-time FA Cup holders from Betway if the deal is concretized.

It will be a massive turn-over for the Tarkwa-based side who are enjoying a fabolous start to life in the Premier League.

Medeama are second on the league table with 20 points, just a point behind leaders Ashantigold and could move top of the table after this weekend's round of matches when Great Olympics visit the dreaded Akoon park.

The giants mining firm has been instrumental in the rapid rise of Medeama over the past 10-years, spending thousands of dollars to steer the club's Africa inter-club campaign on two occasions in 2014 and 2016.

Goldfields, Tarkwa-Damang has handed over the Akoon park to the club for temporal use following the closure of the Tarkwa NA Aboso park.

The mining firm is already constructing a $13m 10,000 seater capacity stadium for the club amid a sustained sponsorship to make the team unbeatable in the West African nation.

Goldfields have been instrumental in the successful drive of Medeama, pumping in millions of dollars to drive the ambitious Ghanaian side over the past decade.

The mining firm has been instrumental in the driving juggernauts in the development and promotion of the game in the Western region of Ghana.

The new stadium will be a major boost for the players, coaching staff and the people of Tarkwa.

It will help to attract and retain talents as well as providing an excellent base for community engagement and footballing excellence in the Southern part of Ghana that will inspire future generations.

Goldfields have not relentless in their resolve to keep faith with the people by continuously supporting their biggest and enviable brand – Medeama Sporting Club.

Medeama is the most successful team in the FA since it was reintroduced in 2010, clinching its twice in the process.