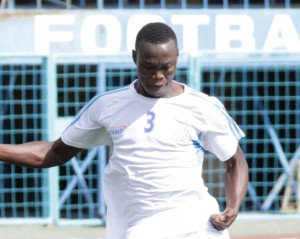 The 18-year-old, who is currently on the books of Tanzanian giants Azam FC, has attracted interest from the European outfit following a breathtaking displays in the East African country.

Spartak Moscow have slapped in an official request for the services of the former Medeama powerful centre-back, officials of Azam FC have told GHANAsoccernet.com

But it's unclear if Azam will let him go after joining in August this year.

The mouth-watering offer is turning heads in the club with Amoah impressing heavily on daily basis.

The young defender has become an instant hit since he joined the Ice -Cream Makers from Ghanaian side Medeama five months ago.

He has commanded regular playing time at the club and played a key role as the finished the first half of the season third on the log.

The Ghana Under-20 towering centre-back has been tipped for greatness with his superb defending abilities.