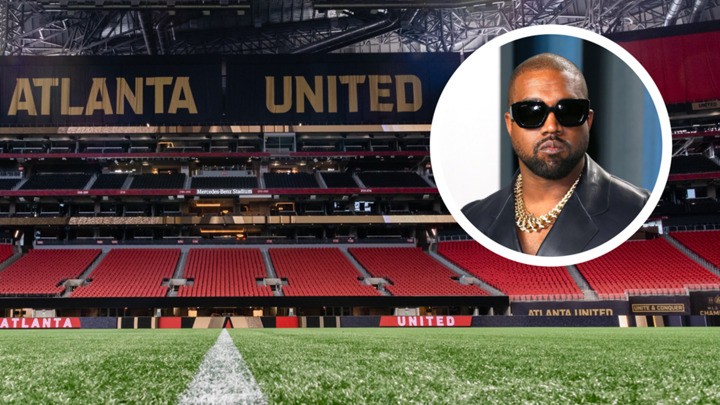 Kanye West raised eyebrows this weekend after being spotted in the crowd for Atlanta United's match against the Columbus Crew at Mercedes-Benz Stadium.

His appearance came shortly after the stadium hosted a listening party for his upcoming album Donda and it soon emerged that the legendary rapper's stay inside the home of Atlanta United is set to be an extended one as he's set to live in the venue for the foreseeable future.

West's stay in Atlanta began with a massive listening at Mercedes-Benz Stadium last Thursday as he began to unveil his highly-anticipated album Donda.

The album is the rapper's 10th studio album and is named after his mother, Donda West, who died at the age of 58 following plastic surgery complications in 2007.

On Saturday, West was spotted in the crowd during Atlanta United's 1-0 loss to the Crew, with the rapper sporting a face covering in the supporters' section.

Soon after, reports emerged that West was planning on living in the stadium as he continued to put the finishing touches on his new album, assembling a living quarters and a temporary studio while bringing in a personal chef.

West took to Instagram to all but confirm those reports as he posted a picture showing his temporary living situation inside the stadium.

It's unclear exactly which teams West supports, although he was seen mingling with fans in the Atlanta United supporters' section.

The rapper posted several Instagram videos from the game, which Atlanta lost 1-0 on a goal from the Crew's Jonathan Mensah.

Although born in Atlanta, West was raised in Chicago, which means he could potentially have some connection to his hometown team, the Chicago Fire.

In terms of European clubs, he has previously been spotted wearing a Manchester United jacket, with the club showing off the fact in social media back in 2018.

West wasn't the only famous musician in attendance on Saturday as African star Davido was also on hand.

Davido, who was born in Atlanta to Nigerian parents, was on hand as the latest celebrity to take part in the club's Golden Spike pre-game tradition.

Throughout Saturday's game, fans at the stadium took to social media to confirm that West was in attendance, with many taking quick photos or videos of the masked rapper.

Some of the industry's most prominent artists were in Atlanta for the Donda listening party, which saw West unveil his new album in front of a sold-out crowd.

The party, which was announced two days prior, started nearly two hours late before West emerged to a white-covered field wearing a red puffy jacket.

Among the attendees were Rick Ross, Khloe Kardashian and West's estranged wife Kim Kardashian West, who was at the stadium with their children.

West and Jay-Z, the rapper's long-time friend and co-collaborator for their famous Watch the Throne album, had a falling out that began in 2016, but now appear to be back on good terms, which will serve as great news to fans of hip-hop.

In the days leading up to the original listening party, photos emerged showing Atlanta rappers Playboi Carti and 2 Chainz recording verses for the album at Mercedes-Benz Stadium.