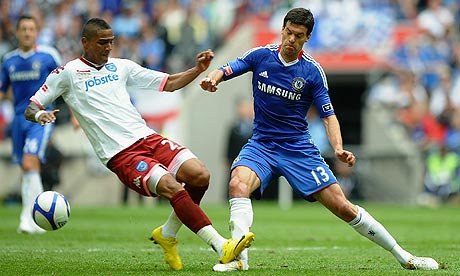 Germany midfielder Michael Ballack slapped Kevin Boateng in the face before the Ghana international's crunching tackle ruled the Chelsea ace out of the World Cup.

The latest twist to the Boateng-Ballack further fuels the suspicion that there was bad blood between the two players that led to the career-ending tackle.

This has led to cyber fights between Ghanaians and Germans while other nationals like the English joining the fight to back the Ghana international.

The fact that Boateng has snubbed the Germans to play for the Black Stars has also irked the Germans, sparking them into cyber attacks.

Boateng's dad also revealed the tension between the two players years back which might have led Ballack to slap the Ghanaian player.

Ballack, the Chelsea and Germany midfielder, is now considering suing Portsmouth's Boateng for the foul that has put him out of the World Cup finals with ankle ligament damage.

Ballack, the Germany captain, has been ruled out for eight weeks with the injury he sustained in Saturday's FA Cup final victory over Portsmouth.

His agent Michael Becker told German media yesterday that he is considering suing Boateng for lost earnings in sponsorship and bonuses that could total Â£855,000, and may also contact the police.

Boateng, who may represent Ghana against Germany in Group D in South Africa next month, yesterday publicly apologised.

He said: "All I can do is apologise. I was just too late and I hit him straight on. It looked stupid.

"I apologised to him twice on the field and now for a third time. It was not intentional."

Ballack is now considering retiring from international football, although he is expected to delay a final decision until after the World Cup.

"I have to think over a few things but that was always the case," Ballack said.

"I want to be playing football again as soon as possible. I assume that I'll be fit for the start of the season."

Ballack's current deal with Chelsea runs out this summer but speaking from Germany's training camp in Sicily he said: "I reckon that I'll extend my contract."