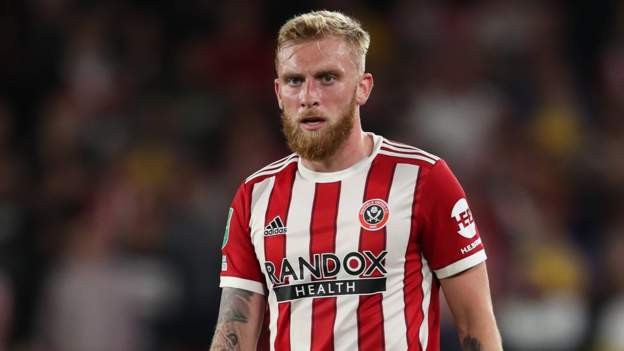 The Football Association is investigating a video on social media which it is claimed shows Sheffield United's Oli McBurnie stamp on a fan during a fracas.

It is not clear if McBurnie makes contact with anyone and the circumstances are unknown.

A Twitter user said McBurnie, who is injured, looked "more like he was trying to step over him with one bad leg", to which he replied "100%".

Scottish striker McBurnie, 25, missed the game with a foot injury he sustained in April.

McBurnie liked a Tweet about the incident and replied

Earlier in a separate incident, police arrested a man after Blades captain Billy Sharp was allegedly assaulted by a fan at the end of the game.

Television footage showed a supporter charge at Sharp during a pitch invasion as the player stood on the sidelines.

Forest won 3-2 on penalties after the two legs finished 3-3 on aggregate.

The Professional Footballers' Association (PFA) has called for a review into matchday security and fan disorder following the incident involving Sharp.

The EFL condemned the pitch invasion at Forest, and has warned it could consider measures including capacity reductions should such similar occurrences happen in future.