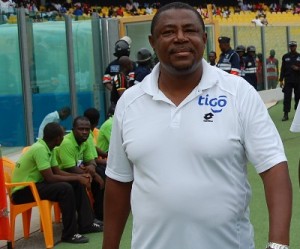 Paa Kwesi Fabin has been forced out of newly-promoted Wassaman FC and will now pursue his ambitions of coaching the national Under-17 team.

The former Hearts of Oak trainer joined the Tarkwa-based side on a "gentleman's agreement'' to help them secure Premier League.

He passed the test and aid their promotion but was never handed a contract.

The club appointed Herbert Addo and that meant there was no space for him on the bench.

Fabin believes his decision to apply for the Black Starlets job denied him a permanent contract.

"There was no existing contract between me and the club. I have expressed interest in coaching the national Under-17 team and I made them fully aware of that. Â I wish them all the best," He told Accra-based Happy FM.

Fabin is one of the few experienced coaches around after handling Heart of Lions and Asante Kotoko.

He had a short stint with Berekum Arsenals.