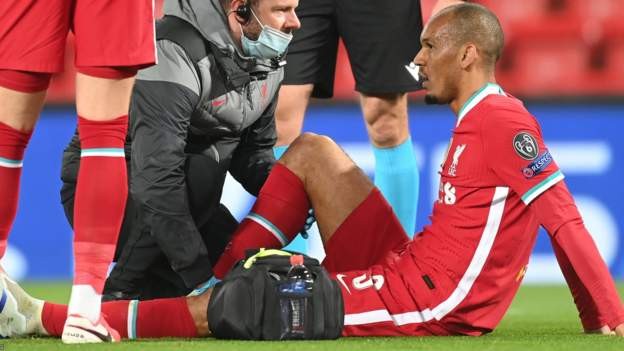 The Brazilian joined Virgil van Dijk and Joel Matip on the sidelines after pulling up with a hamstring injury during the 2-0 Group D win at Anfield.

Midfielder Fabinho has been filling in for Van Dijk in the centre of defence since the Netherlands international suffered a serious knee injury in the Merseyside derby against Everton on 17 October.

"He felt his hamstring, and that's not good," said Klopp when asked about Fabinho's injury after the Reds went two points clear at the top of Group D.

"He said he could have played on but no sprints, which doesn't help. We will see, we will know more after a scan but clearly it isn't good."

Nineteen-year-old Rhys Williams, who was on loan at National League North Kidderminster Harriers in the sixth-tier of English football last season, was sent on to partner Joe Gomez at the back.

"We're doing really well but it's a shock for a team because now we have to sort that injury," added Klopp.

With games coming thick and fast, Liverpool's options are stretched to the limit in terms of fit and experienced centre-backs.

Already resigned to being without the influential Van Dijk for the majority of the season, Klopp has yet to welcome Matip back to training since he suffered a muscle injury in the Merseyside derby.

Asked if Matip might be fit for Saturday's 17:30 GMT home game with West Ham, Klopp said: "I don't know. We have to see.

"If it was one game at the end of the season, we could probably make one or the other play. But we have a game three days later. The players need a proper build-up."

Phillips made his first-team debut on 5 January 2020 in an FA Cup third round match against Everton before re-joining Stuttgart on loan until the end of the season.

"We have very young and inexperienced alternatives, and in the moment it looks like we have to choose one of them," added Klopp.

'Van Dijk will be a massive miss' - do Liverpool have enough cover?Who is Rhys Williams?

Williams was handed his first-team debut when he partnered Van Dijk in the 7-2 win over Lincoln City in the Carabao Cup on 24 September.

Born in Preston, the England youth international signed his first professional contract with Liverpool in February 2019.

Gary O'Neil, assistant coach of Liverpool's Under-23 side, told BBC Radio 5 Live: "Rhys' years at the academy have given him good fundamentals, he's a good defender.

"He was on loan at Kidderminster last season and he had a lot of tools from academy football, but playing at a team like that will give you more game time and probably toughen you up a bit.

"Injuries have accelerated his involvement with the first team. I'd like to think he can take it in his stride.

"There are some fantastic professionals in that Liverpool team who will make him feel more comfortable.

"Players like Jordan Henderson and James Milner, they will be getting around him and making sure he feels like he's part of it.

"I think he should do absolutely fine."

'Klopp will relish this'

Former Liverpool player Adam Lallana believes Klopp will use Fabinho's setback as a challenge ahead of a busy run of games.

After this weekend's game against West Ham, the Reds head to Italy to face Atalanta in the Champions League before an away game at Manchester City on 8 November.

"He won't use anything as an excuse," Lallana told BT Sport.

"He will meet the challenge face on. It is going to be a test but the lads will all get together and help each other out.

"Klopp enjoys these tests and will be fired up for it."