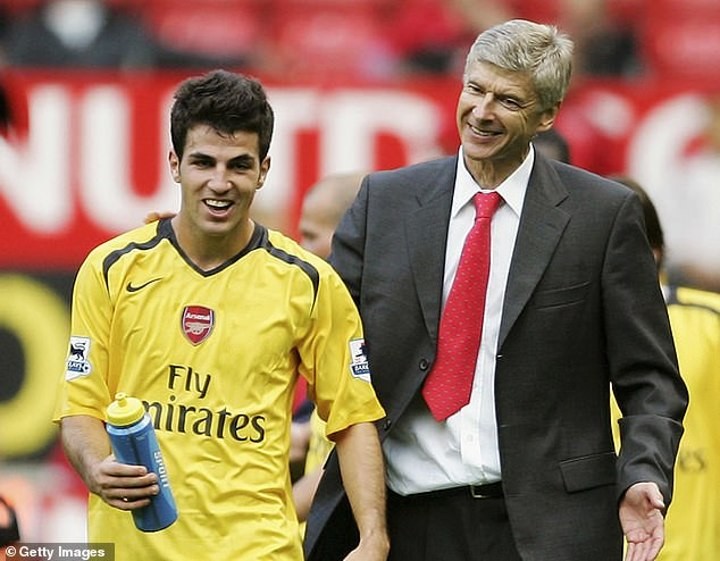 Cesc Fabregas has revealed how Arsene Wenger cut short his holiday and took a private yet to convince him to sign for Arsenal at the age of just 15.

Fabregas, who was then captain of his youth side at Barcelona's famous La Masia academy, was approached by a scout from Arsenal and it quickly became clear the north London club were set on bringing him to England.

There was an offer from Manchester United on the table and the plan was to make one visit to London and another north to Manchester the following month - but Arsenal did all in their power to charm him so he axed his second visit.

Speaking to Rio Ferdinand on his new 'Locker Room' series on YouTube, it emerged the two could have been team-mates at Old Trafford without the intervention of Wenger.

'I was 15 and I was the captain of that team and I was well valued,' Fabregas said.

'On top of me there was (Andres) Iniesta and other players who had potential to make it. One day, a scout came from Arsenal to talk to my parents. And I always like to listen. Even now, five years ago, I always listen to what people have to say. Out of respect, too. We did that and the guy told me he had been to watch me 50 times and that I was made to play for Arsenal and the Premier League.

'When I went to London it was June and everyone was on holiday. Arsene Wenger was in Paris for holiday but he flew in a private jet to meet me. David Dean came to London Colney to meet me.

'This shocked me in a way, like "wow, Arsene Wenger", I am 15 years old, I am nobody and this guy is breaking up his holiday to meet me. This for me was like "wow".

'And then we are talking, he spoke to my mother, asked what I was like when I was little. He showed me the training ground and I just fell in love, I fell in love with the whole project, the whole thing.'

Fabregas went on to make 212 Premier League appearances for the club but went on to admit that he was motivated to leave and make a return to Barcelona when he could not bring the success he demanded of himself to north London.

During his time at the club, Fabregas won the FA Cup, the Community Shield and came runners-up in the Champions League.

'I always felt that I was competing, the team in general, competing against the world. (Manchester United), Chelsea, sometimes Liverpool and even though I speak to guys at Chelsea and the Spanish guys at Liverpool and they would say they used to hate playing against us (at Arsenal).

'You used to hate it but we always lost - particularly in important moments. I felt always so frustrated to see big teams winning and always having that edge. I was young, passionate, and gave everything for Arsenal.

'I was hungry and wanted to win, I was a competitor and I would have done anything to win with Arsenal. But I felt this wasn't coming.'