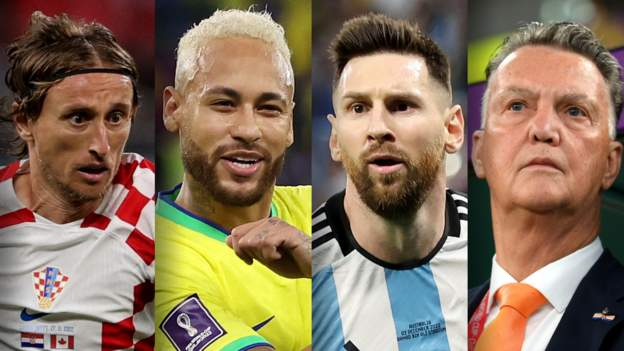 If the two appetising showdowns which kick off the World Cup quarter-final stage don't give you that 'Friday feeling' then nothing will.

The tournament favourites versus the 2018 runners-up.

Then a repeat of the 1978 final in another glamorous match-up.

Both of the first two quarter-finals will be live on BBC TV, radio and online on 'Fabulous' Friday, meaning you can spend most of the day following our coverage and ensuring you don't miss a thing.

The two matches will be broadcast on BBC One and the BBC iPlayer.

Radio commentary of both quarter-finals will also be available in the UK on BBC Sounds, with live text coverage on the BBC Sport website and app.

Here is a summary of what we have got to look forward to...

Brazil have long been an alluring attraction for football fans and they have again been delighting their supporters - plus many neutrals from around the world - with their free-flowing moves in Qatar.

The Selecao tore South Korea apart with a devastating attacking performance in their last-16 tie, underlining why Tite's side are considered the favourites to lift the trophy on 18 December.

Even the manager enjoyed the show, joining with his players as they danced in celebration of the 4-1 win. Now they're aiming to provide more entertainment on Friday.

"What I've seen so far, when you take a look at their players, their quality, skills and value, then it is indeed terrifying," said Croatia coach Zlatko Dalic.

"We need to enter the match with much faith, self-confidence and looking for our chances, enjoy the occasion of playing Brazil, that's it."

Croatia, who lost to France in the 2018 World Cup final, are likely to pose the toughest test so far for five-time champions Brazil.

Their progression has again been orchestrated by 37-year-old Real Madrid midfielder Luka Modric, who indicated before arriving in Qatar that this would likely to be his last major tournament.

"When you see people like Luka Modric running and dying on the pitch, it gives us younger players extra energy to run," said Croatia full-back Josip Juranovic.

The prospect of the Netherlands and Argentina coming together again at a World Cup evokes vivid memories across different generations.

Whether it is Mario Kempes inspiring Argentina to victory in the 1978 final, that sublime touch and finish from Dennis Bergkamp to put the Dutch into the 1998 semi-finals, or a drab 2014 encounter ending with Argentine keeper Sergio Romero becoming the penalty shootout hero, there is a long-developed rivalry between the nations which adds a romanticism.

This occasion should be no different.

It could be the last time we see Argentina's Lionel Messi - considered by many as the greatest player ever seen - on the biggest international stage of all.

It could also be the last time we see the Netherlands manager Louis van Gaal in the dugout.

Messi, 35, carries the hopes of his nation as he aims to land a title which has so far eluded him, while 71-year-old Van Gaal - who recovered from prostate cancer earlier this year and is set to step down after the World Cup - is trying to ensure the three-time runners-up finally go one step further.

The veteran coach's plan may largely focus on containing Messi and catching Argentina on the break, as the Dutch look to take revenge for their semi-final defeat in 2014.

"We can surprise teams with our plan. We were also the better team then and Messi didn't see much of the ball," said Van Gaal, whose bullish talk further stokes anticipation for the contest.

Wherever you are, whatever you're doing, it promises to be a World Cup Friday which you won't want to miss.

Fifa World Cup: Schedule and route to the final