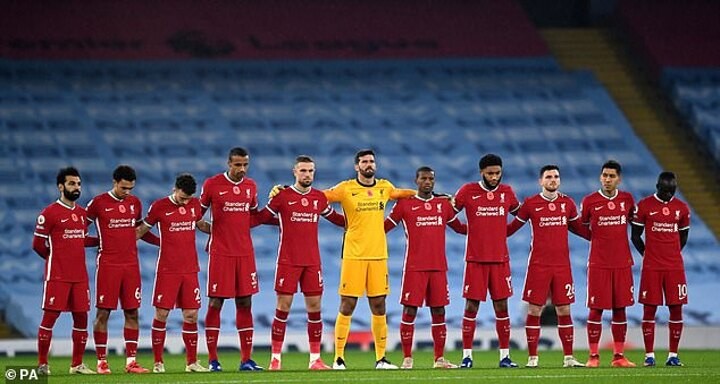 How often do teams take that daunting trip to Anfield with a genuine expectation of winning against Jurgen Klopp's juggernaut of a side?

Liverpool are unbeaten at home in 63 games, have started the season well despite a tough run of games and yet those fortress walls could be in for a battering this weekend.

To call this game a banana skin for the Premier League champions is underselling it. The new £50million training base might as well be a luxury rehab centre given the Reds' staggering injury list and Leicester will think they're there for the taking.

The foundation of so much of Liverpool's recent success has been their settled defensive line but it has been decimated by injury.

Virgil van Dijk is out for the season with his cruciate ligament damage and his sidekick Joe Gomez is also sidelined for the long haul after a rupturing his patella tendon in England training.

Trent Alexander-Arnold, so often a focal point for the team in attack as well as defence, picked up a calf injury against Manchester City and Andy Robertson has recently tweaked a hamstring on international duty, though he could still play on Sunday.

In midfield, Jordan Henderson faces a late assessment after feeling a niggle on England duty, Thiago Alcantara has not played since Richarlison's horror tackle on him in the Merseyside derby and Fabinho is returning to fitness after picking up a hamstring injury.

Mo Salah, the team's primary goal threat with eight in the league this season, is isolating having contracted coronavirus.

Even understudy right-back Neco Williams missed Wales' game against Finland is is doubtful for the weekend with a foot injury.

It must be said that Leicester have huge injury problems of their own at the back, Timothy Castagne and Ricardo Pereira are expected to be unavailable, Caglar Soyuncu and Daniel Amartey are long-term absentees and Wesley Fofana is facing a scan on his knee.

But it is Liverpool who are shamed by the numbers at the back this campaign. They have been conceding an average of two goals per game, ranking them joint 19th in the league.

It will be the job of a makeshift rearguard group to change that on Sunday. James Milner could slot in at right-back with Joel Matip and possibly Fabinho in the middle and Robertson or Kostas Tsimikas out wide.

The stats make for grim reading. Only Sheffield United have kept fewer clean sheets than Liverpool this season (1).

And when opposition sides do manufacture a shooting chance, Liverpool have the third highest xG per shot faced (0.14).

All this will be music to the ears of Rodgers and Leicester, flying high at the top of the Premier League table.

Jamie Vardy is on eight goals already and James Maddison is starting to tick along nicely as well. Liverpool's weaknesses are exactly the areas that the Foxes can exploit.

Leicester have the third highest xG total in the Premier League and the highest of any side Liverpool have faced so far this season.

What will frighten the Reds however, is that Sunday's visitors lead the top flight in two key metrics.

An eye-catching shot conversion rate of 24 per cent ranks them first, scoring almost one in every four shots, meaning their xG per shot is 0.18.

The Foxes only rank 14th in shots per game (9.4) but when they manufacture an opportunity, there's a strong chance the ball ends up in the back of the net.

If the stats aren't a clear enough indication of how poorly the Liverpool side currently match up on paper against Leicester, their style of play is another thread the argument.

While their 7-2 obliteration by Aston Villa served as a wake-up call - they haven't lost since - it demonstrated clearly the ways win which Liverpool can be hurt.

Pace in behind the high line, the technical ability to beat a man in midfield to free up space and raking diagonal balls over the top all create massive vulnerabilities for Klopp's men.

A closer inspection of the high-pressing, front-foot teams Leicester have faced this season will also concern Liverpool fans.

Their former manager has orchestrated sensational victories over Manchester City and then Leeds. Pep Guardiola and Marcelo Bielsa's styles, while different in some ways to Klopp's Liverpool, retain similar elements.

The Midlands club took City to the cleaners in a 5-2 thumping at the Etihad back in September and had far too much quality on the break for Leeds, beating the exciting new boys 4-1.

Will Klopp tinker with his much-changed side's approach to be more cautious? It doesn't seem in the nature of a man who opted for a 4-2-4 line-up away at City before the international break.

The bookies rarely get it wrong and the odds for this game back-up the above points.

Liverpool are almost evens to win on Sunday and clearly the money men think this will be as tricky for the Reds as everything indicates.

A porous defence against a devastating attack, one side with a vulnerability to the counter attack and another with ruthless efficiency on the break, an injury-ravaged defence against a clinical forward line... it's guaranteed to be 0-0 now.