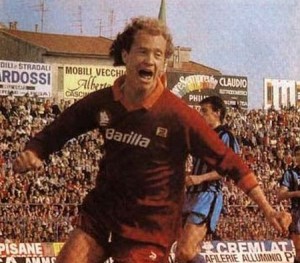 Former Roma midfielder Roberto Falcao has told Francesco Totti that he must not let external forces dictate his future with the Giallorossi.

The comments come after Totti’s dispute and absence from I Lupi’s first team, after the 39-year-old voiced his displeasure at barely featuring under coach Luciano Spalletti, leading to speculation the club legend may leave when his contract expires in the summer.

“Totti is one the best players Italian football has ever had.” said Falcao to Dagospia. “He is one of a kind, he can play anywhere he wants to.

“If Roma had won the Champions League he would have won the Ballon d’Or. Francesco must be happy with his choice for the future.

“He has acquired this right. Only he can decide, no one can intrude.”

Falcao was also asked about Roma’s new Brazilian signings, midfielder Gerson and goalkeeper Alisson. “Gerson I know a little about. People speak well of him.