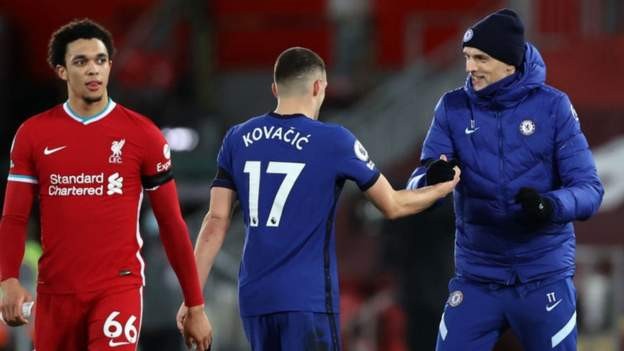 The scenes could not have been more different, the emotions more contrasting - and they encapsulated the current conditions of resurgent Chelsea and a Liverpool side now making a mockery of their Premier League title defence.

Chelsea were in charge and a goal up after 62 minutes when Liverpool manager Jurgen Klopp, searching for answers and looking to avoid an unwanted place in history with a fifth straight Anfield loss, decided it was time for change.

To the general astonishment of most observers, and to the very obvious fury of the player involved, the man Klopp chose to remove was top goalscorer Mohamed Salah.

Salah departed in what might be politely termed a huff complete with full-on head-shaking, wrestling furiously with a large coat when he got to the bench, as Diogo Jota returned after being absent since early December because of injury.

The Egyptian forward was clearly bemused and unhappy.

He would hardly be beaming with smiles at being hooked in such unceremonious fashion so the reaction was no great surprise, but it was a sign of Liverpool and Klopp's current struggles - and perhaps some muddled thinking - that it was their leading marksman who was removed when they needed a goal so badly.

Mohamed Salah looked disappointed when he was taken off against Chelsea

If it was a punt by Klopp it was a gamble that did not work as Chelsea moved into the top four with a victory that left Liverpool adrift in seventh, not merely out of those Champions League places, but now also three points behind neighbours Everton, who are fifth and have a game in hand.

Cut to the Chelsea bench with nine minutes left as match-winner Mason Mount, outstanding all night, was replaced by Mateo Kovacic, with manager Thomas Tuchel moving to shut down any late Liverpool comeback.

Mount was all smiles, despite his early night, as applause from the Blues' bench echoed around the largely deserted Anfield and the whole feeling was of a job about to be very well done.

The Anfield misery mounts - listen to the Football Daily podcast

Liverpool took a step forward with victory at Sheffield United, but the moment they walk into their home ground they take several steps back - and this was retrograde in the extreme.

The champions played themselves back into top-four contention at Bramall Lane on Sunday, but here - despite understandable claims for a second-half penalty when Roberto Firmino's cross hit N'Golo Kante's hand - this was the same stodgy, uninspired Liverpool that have inhabited Anfield since the landmark loss to Burnley on 21 January that ended a 68-game unbeaten home league run.

The story of Liverpool's injuries has been told countless times and they have every right to state those facts as one of the reasons why this has turned into such a low-key, dismal follow-up to the title won so spectacularly and convincingly last season.

It must also be stated, however, that to lose these five home games in the manner Liverpool have lost them is unacceptable when set against their previous high standards.

Yes, the Reds have injuries, but they have enough quality - including a world-class trio of attackers in Salah, Firmino and Sadio Mane - to perform with much more drive, creativity and verve.

Liverpool have now gone more than 10 hours without a goal in open play at Anfield - almost unthinkable given the manner in which even the finest teams were intimidated and besieged by Klopp's teams here in previous years.

Liverpool are four points off the top four after Thursday's games

The lack of the passionate Anfield crowd has also been cited. It will have an impact but, once again, five straight home losses for the Premier League champions is inexcusable, and other teams wrestle with the same surreal situation.

Klopp now needs to set this record straight and fast against relegation-threatened Fulham this weekend. He needs to solve the riddle of how to get his shot-shy forwards firing.

If he does not, then he is staring at something else which would have been unthinkable not so long ago - no Champions League football next season.

The last time Chelsea were at Anfield in July, it was the night Liverpool had waited 30 years for as the title was finally lifted at the end of a rip-roaring 5-3 win.

How times have changed for both clubs.

In July, Frank Lampard was the man in the away dugout and in feisty mood as he traded words with Klopp and his backroom staff, a Champions League place on the way for Chelsea along with a £200m plus investment in talent.

Lampard was sacked in January so, this time, Tuchel was in opposition to the manager in whose footsteps he followed at Mainz and Borussia Dortmund.

And the elation was clear to see on Tuchel's face after arguably the best display since his arrival - a win that means he has yet to experience defeat in his first 10 games.

This was very impressive from Chelsea and suggested fourth place may not be the limit of their Premier League ambitions this season. They are certainly in better form than goal-shy Manchester United and a Leicester City side suffering a blip, both of whom are above them.

The Blues were not only superbly organised and defensively resilient but also razor-sharp in attack, where Timo Werner had one of his best games since arriving from RB Leipzig.

Kante gave Liverpool nothing in midfield and such was their protection of Edouard Mendy, the keeper was barely disturbed until he made a routine claim from Georginio Wijnaldum's tame header six minutes from the end.

Mount's quality - strangely questioned by some - was on show from the first whistle and his winner was of the highest class, cutting inside before firing low past Liverpool keeper Alisson with his right foot at the Kop end.

I see improvement every game - Tuchel on ‘complete’ Chelsea performance

It was all watched by Liverpool legend Sir Kenny Dalglish, celebrating his 70th birthday at Anfield. He has had countless happier nights here and will enjoy them again in future.

On Thursday, he saw Chelsea looking like a team on the up while the fallen champions were once again left looking in vain for the inspiration that came so naturally in recent years.

The Blues can feel confident of a top-four finish. The same cannot be said for Liverpool. It is some fall and they must arrest it very soon.