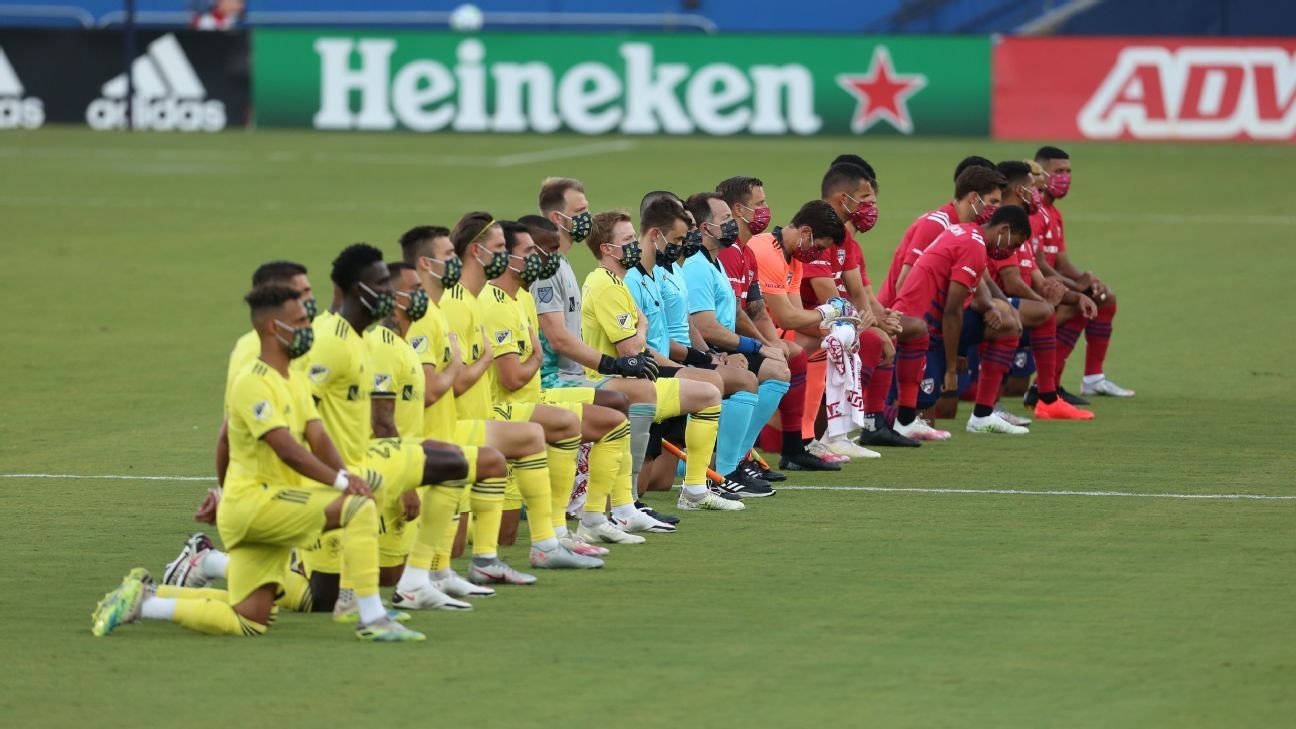 There was a smattering of boos when players from FC Dallas and Nashville SC collectively took a knee during the national anthem before their Major League Soccer game on Wednesday in Frisco, Texas.

Dallas defender Reggie Cannon said he was disgusted by the boos at Toyota Stadium when players and officials knelt to call attention to racial injustice. He said teammate Ryan Hollingshead turned to him afterwards and said he was sorry.

"You can't even have support from your own fans in your own stadium," Cannon said. "It's baffling to me.

"As a team we try to give the best possible product on the field and these last six months have been absolute hell for us. Absolute hell."

Dallas and Nashville had not played a game since the season was suspended on March 12 because of the coronavirus. While other teams played in the MLS is Back tournament in Florida over the past month, Dallas and Nashville were forced to withdraw before the start because of positive COVID-19 tests among players from both teams.

The teams met as MLS restarts the regular season in local markets. Some of the games will include fans if local jurisdictions allow it. Just over 5,000 were allowed to attend the match at Toyota Stadium, although the crowd that showed up appeared smaller.

The death of George Floyd has spurred a number of MLS players to form the group Black Players for Change, which seeks to address systemic racism in soccer and society.

At the opening game of the MLS tournament in Florida, members of the group collectively stood in silence, fists raised, for more than eight minutes. Players and coaches wore Black Lives Matter T-shirts throughout the event.

Eight minutes, 46 seconds is the length of time prosecutors say Floyd, a 46-year-old Black man, was pinned to the ground under a white Minneapolis police officer's knee before he died. Players and coaches wore Black Lives Matter T-shirts throughout the event.

MLS is Back: The best and worst of the tournament, plus grades for every teamPortland Timbers crowned fitting champions of surreal MLS is Back Tournament

The anthem was not played before games at the tournament. Cannon said the players had asked that it not be played before the game because they didn't feel it was right "for the anthem to be played in this moment."

"They can't see the reason. They think we're the ignorant ones. "It's incredibly frustrating. I'm sorry to have this tone, but you have to call it for what it is."

Cannon said he expected to have some negative pushback over the unified response.