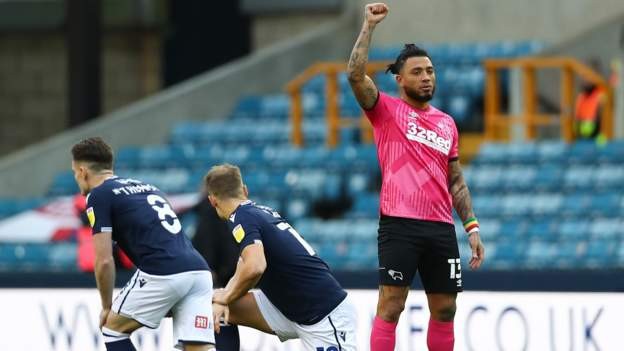 It is the first time supporters have been allowed into The Den this season, following the lifting of the second national lockdown on 2 December.

The boos rang out as the two teams took a knee before kick-off in a game which Wayne Rooney's Rams won 1-0.

"It is just disheartening. How do these fans get allocated to the games?" said former England defender Micah Richards.

Players, officials and staff at Premier League and English Football League games have been taking a knee pre-match since the 2019-20 season restarted in June in order to show their support for the Black Lives Matter movement for racial equality.

Richards told BBC TV's Final Score: "There are 2,000 so you can pinpoint the people going. There are no excuses. I am sick to death of talking about this situation.

"It is so disheartening because it is like we have come so far but we have so far to go. I don't even like talking about the matter. It feels like it falls on deaf ears. It is time and time and time again."

"It says to me that a minority of Millwall fans are spoiling it for a club that is going in the right direction with a tag they have had for years and years and they are trying to eradicate it."

American football player Colin Kaepernick started kneeling symbolically during the pre-game national anthem in the NFL in 2016, in protest at police violence against African-Americans in the United States.

The Black Lives Matter movement and taking a knee has grown in prominence in the United Kingdom following the death of George Floyd in the US in May, which sparked protests around the world.

The 46-year-old, an unarmed black man, died after a white police officer held a knee on his neck for nearly nine minutes.

On Friday, Millwall's first-team squad issued a statement supporting efforts to rid the game "of all forms of discrimination".

The statement added: "The gesture of 'taking the knee' before matches provides an opportunity for us to do exactly that and continues to allow all those playing to publicly showcase their support - on behalf of the whole squad - for the fight against discrimination.

"We wish to make clear that taking the knee, for us, is in no way representative of any agreement with political messaging or ideology. It is purely about tackling discrimination, as has been the case throughout.

"We will continue to do this until the start of the new year when a new and comprehensive anti-discrimination strategy will be announced by the club."

Nathan Byrne (Derby County) is shown the yellow card for a bad foul.

Attempt missed. Mahlon Romeo (Millwall) right footed shot from outside the box is high and wide to the right. Assisted by Ryan Leonard following a set piece situation.

Martyn Waghorn (Derby County) is shown the yellow card for a bad foul.

Attempt saved. Matthew Clarke (Derby County) header from a difficult angle on the right is saved in the centre of the goal. Assisted by Max Bird with a cross.