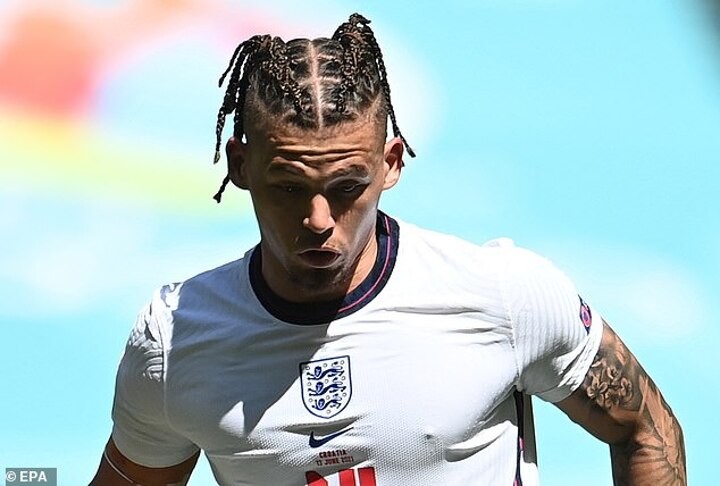 There had been some question over whether the 25-year-old should start in midfield alongside Declan Rice, but he quickly put them to bed with a stunning display in the Three Lions.

With England struggling to open the scoring, Phillips took matters into his own hands with a burst of energy from midfield to break the lines before threading a great pass for Sterling to score after 57 minutes.

Fans, players and pundits have been drooling over his performance in England's opener, with the midfielder even getting praise from Germany legend Michael Ballack.

Former Football Focus presenter Dan Walker tweeted: 'Rice and Phillips is a tidy combination in midfield. The Yorkshire Pirlo - is having a great game so far for #ENG.'

Another user reversed the roles suggesting Pirlo was the 'Italian Kalvin Phillips'.

Others have praised Southgate's selection of Phillips, after there had previously been some suggestion that Borussia Dortmund wonderkid Jude Bellingham could start ahead of him.

Sportsmail pundit Chris Sutton tweeted that Phillips was a 'great selection' while Twitter user reiterated commentator Jermaine Jenas' statement that he had gone from a 'maybe starter to a must starter'.

One Twitter user commented that Phillips had been 'unreal' while another had the same adjective to describe his assist.

Betclever posted a picture from the TV show Brooklyn Nine-Nine with the caption 'Kalvin Phillips with the Croatian midfield' showing off the midfielders impressive dominance in the midfield over his opponents.

Phillips' performance will give manager Gareth Southgate a huge boost going forward in the tournament.

It was likely that Jordan Henderson would have started ahead of Phillips without his recent injury concerns.

But Henderson might find it tough to oust Phillips from the squad even if he returns to full fitness after the latter's performance.