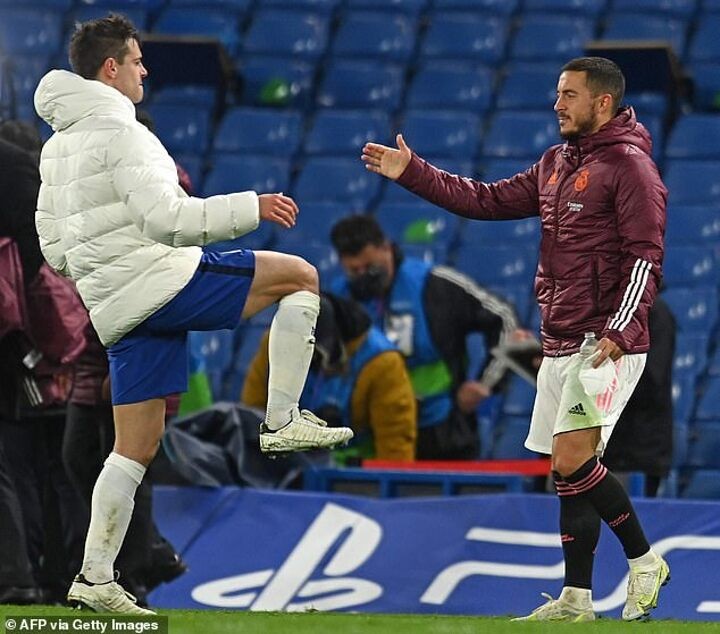 Real Madrid fans were furious at Eden Hazard’s reaction to being kicked out of the Champions League on Wednesday night.

The Belgian – who returned to Stamford Bridge for the first time since his £88million transfer to Spain in 2019 – was seen joking and laughing with his former team-mates after the game.

Fans took to social media to express their frustration at his reaction after the 2-0 loss that saw Thomas Tuchel's side advance to the final 3-1 on aggregate.

Real Madrid fans were not only disappointed by his actions off the pitch, but his performance on the pitch.

Having been fit for just 755 minutes of Champions League football this season, fans were hoping his return to the squad would be inspired.

However, he failed to make his mark on the game and was hook off in what turned out to be a miserable night for Real Madrid.

Nevertheless, Hazard seemed in high spirits after the game and was filmed joking and hugging his former team-mate Kurt Zouma.

As a result fans took to social media to both criticise and mock Hazard - with many joking he was secretly playing for Chelsea the whole time.

One fan wrote: 'Eden Hazard just got knocked out of the Champions League and this is his reaction after the game'.

While another added: 'Eden Hazard could genuinely not care less about Real Madrid.'

Other supporters shared the same opinion, writing: 'Hazard played against Real Madrid and this is so big an evidence. How can you be laughing this hard when you just lost a #UCL Semi final?'