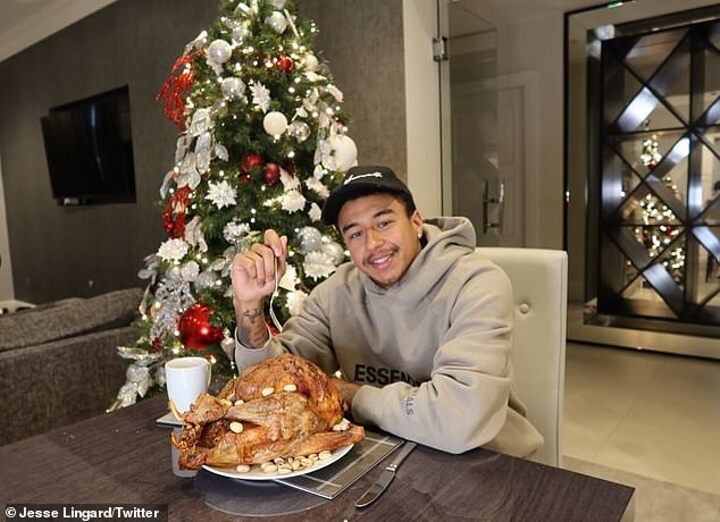 Jesse Lingard has been ridiculed online after he bizarrely promoted pistachio nuts while wishing his American fanbase a happy Thanksgiving.

The Manchester United midfielder took to social media on Thursday to post a series of pictures of himself with a turkey covered in pistachios, leaving fans to poke fun at the advert.

The 27-year-old, who is currently self-isolating after coming into contact with someone who tested positive for coronavirus, tweeted: 'Happy thanksgiving to all my American friends! Nothing beats a bit of turkey today! Even better with a pistachio garnish!' before he followed it with a number of hashtags to show it was an ad.

As a result, fans flocked to the post to poke fun at the England international, claiming the turkey was 'overcooked by two hours' before laughing at the questionable presentation.

One fan laughed that there was 'only one turkey and it isn't the one on the plate' before another claimed he was 'doing more ads that appearances' this season.

Celebrity chef Dean Edwards, who has appeared on ITV's 'Lorraine' and 'This Morning', hilariously pointed out that the midfielder had forgot to take the shells off before covering the turkey.

'I mean I am a big fan but I have to call you out. You can’t just throw a handful of pistachios on the turkey and call it a garnish, epically [sic] when you have to open the garnish by hand to eat it See-no-evil monkey your a bad man!' one fan tweeted.

Lingard, who is a brand ambassador for American Pistachios Growers, is keeping his fans updated with how he's getting on in lockdown after he posted a video of himself working out in a bid to keep up his fitness.

Solskjaer confirmed before United's Champions League game with Istanbul Basaksehir that Lingard will be back soon after coming into contact with someone who has coronavirus.

Solskjaer said: 'Jesse is still self-isolating because he's been in contact with a COVID positive. He'll be back soon.'

Lingard has not been named in any of United's Champions League matchday squads so far this season, despite Solskjaer being able to name nine substitutes in his side.

The midfielder has also been left out of the majority of the club's Premier League squads this season too, with his last appearance on the substitutes' bench coming in the 6-1 defeat to Tottenham Hotspur in October.

Lingard's only two outings this season have come in the Carabao Cup, though he only played the final nine minutes of United's fourth round victory over Brighton in September.