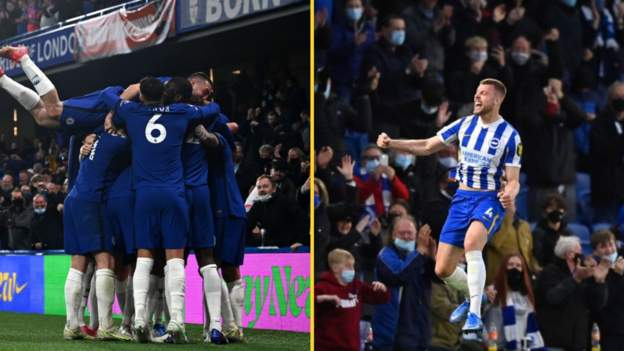 It was the day so many had been waiting for, as fans returned to Premier League grounds.

Some people were attending their first match in more than a year - and what drama they saw.

Brighton thrilled their home spectators with a 3-2 win over champions Manchester City and Chelsea took a massive step towards Champions League qualification with a tense 2-1 victory over Leicester at Stamford Bridge.

But not everyone went home smiling. Those at Old Trafford saw Edinson Cavani score from 40 yards but Manchester United could only draw 1-1 with Fulham, while it was not a happy return for Southampton supporters as their side lost 2-0 at home to Leeds.

A long-awaited small step to normality, but how much does fans being there actually help their team? We got the reaction from some Premier League managers and looked at some stats.

'The fans absolutely helped us'

Brighton boss Graham Potter saw his side fight back from 2-0 down to beat Manchester City in front of 7,495 fans.

"The fans absolutely helped us and played a part in the game," said Potter. "We could have felt sorry for ourselves at 2-0 down but fortunately the supporters got behind us and the atmosphere lifted."

Brighton goalscorer Dan Burn went further and added: "I don't think we would've come back without the fans. We've missed them. It's so good to have them back."

While Brighton, Southampton and Chelsea were all able to host matches in front of 2,000 fans in December, it was the first time there had been any fans in the stands at Old Trafford since March 2020.

"The buzz and the energy was magic, you could feel it in the warm-up and we've really missed it," said United boss Ole Gunnar Solskjaer, who felt his side may have been trying too hard to impress the 10,000 fans.

"We played too much to entertain, making too many difficult choices," added the Norwegian.

"We tried to do the flicks and fancy stuff, the extraordinary stuff, the things that please the fans - that's not us. We should be more efficient. No fluff. You can't have fluff in a game of football."

Southampton lost in front of 8,000 spectators and manager Ralph Hasenhuttl said: "We really tried to give them a win because they've been fantastic and supported us until the end.

"We forgot how good it felt to have them back. It definitely gives us something we can look forward to next season."

Chelsea also had 8,000 fans at Stamford Bridge and boss Thomas Tuchel called football "a different game" without fans, while striker Timo Werner said crowds "make it a lot of fun to play football".

Chelsea gained a vital win over Leicester, with 8,000 fans cheering them onWhat do the stats say?

Nielsen's Gracenote has analysed the difference between matches with crowds and matches without. They compared the 288 matches in the 2019-20 season before the Covid-19 shutdown with the 345 matches with no attendances in the 2020-21 campaign.

Before Tuesday's matches they found that...

The percentage of home wins has dropped from last season's 44.8% with a crowd to 36.5% for the 345 matches played this season with no spectators.Away wins have increased from 30.2% of last season's 288 matches with spectators to 40.9% of the 345 to be played without an attendance.Home teams have scored 12% fewer goals this season in matches without spectators than they did in games with crowds in 2019-20 (1.33 goals per game this compared to 1.51 goals last campaign).Away teams have scored 12% more goals. The increase here is from 1.22 goals per game to 1.36.Referees are awarding more free-kicks to the away teams than the home teams. With crowds last season, home teams were awarded 0.6 free-kicks per match more than away teams. Away teams this season are awarded 0.6 free-kicks per match more than home sides.Previously, home teams would be awarded fewer yellow cards than their opponents but the home clubs are now receiving more than the visiting teams.With crowds, Premier League matches contained 21 dribbles per match on average. Now there are just over 18 dribbles per match with home players still having slightly more.Tackling has also been on the decline with the number of tackles reducing from 33 per match last season with crowds to just over 30 in the 345 matches this term without spectators.