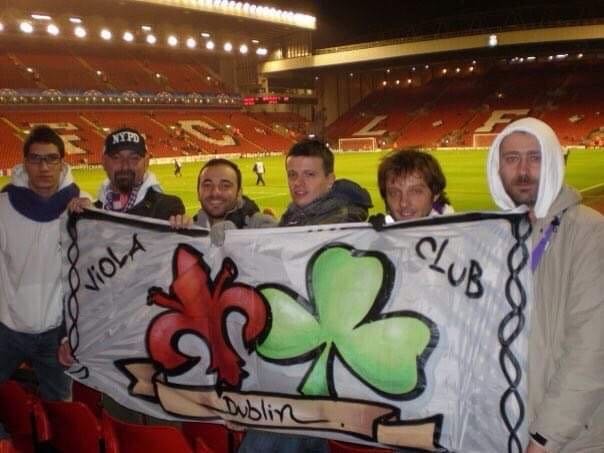 Following an exciting 7-1 won against Roma in Coppa Italia’s quarter-finals and a draw against Udinese, Fiorentina will welcome Napoli for a crucial Serie A clash this weekend in Florence.

Viola fans should be proud of their team last results as they have had a strong start in 2019 haven’t lost a game since their 1-0 defeat to Parma on Boxing Day.

La Viola’s group of fans are based around the world and it is no surprise that Dublin hosts one of the many lovers of the famed purple jersey.

Dublin Fiorentina Supporters’ Club have been in the Irish capital since 2008 and born from one Viola’s fan desire, alongside two other passionate supporters, to bring together more of their fellow Gigliati lovers in one place. “At the beginning, I didn’t know too many Fiorentina fans here,” said club’s founder Simone Rubertelli. “But, after I met Gaia Cellini, Mario Gimignani, Alessandro Matano and Federigo Minelli, we decided to found this club since there were some Viola supporters scattered in Dublin.

“The club is open to everyone in the city, as well as those who come to visit for a short holiday. The best way to be in contact is to send us a message on Facebook.

“At the moment, we don’t have any membership, but our aim is to keep building up our supporters’ base as an official club.

“We noticed that the numbers of Viola fans in Dublin is growing so, we are thinking, eventually, to become associated with the Associazione Centro Coordinamento Viola Club (ACCVC) in Florence later on.” During the first couple of years, the Dublin fan club counted around 10 people and they have always looked to organise European trips to follow their favourite team.

“We have been around Europe to follow Fiorentina’s away games against Everton, Liverpool, Bayern Munich, PSV Eindhoven and Ajax,” Rubertelli added. “During the season, we follow the team at the Woolshed Baa and Grill pub, who kindly host us.”

Fiorentina, that come from six positive results in a row in all competitions, will host Napoli at the Stadio Artemio Franchi on Saturday afternoon, with the fans hoping to enjoy a good match.

“It will be an important game for us. Following the 7-1 win against Roma and the bad performance in Udine, we should get as many points as possible to hope for a European spot this season.

“I really hope for a comeback to Europe this year. We have been gone too long.”

Dublin Fiorentina Supporters Club can be reached via Facebook page, where you can follow all further match-event updates.