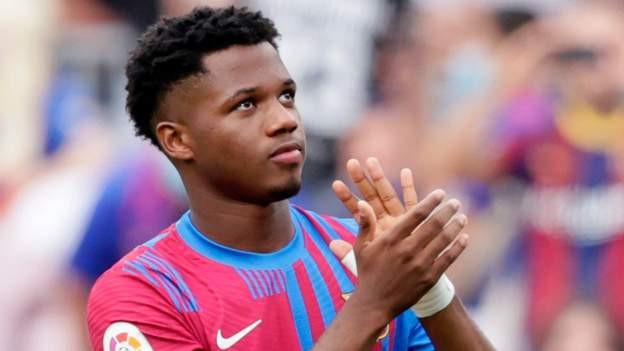 Barcelona eased some pressure on absent manager Ronald Koeman with a comfortable La Liga victory over winless Levante at the Nou Camp.

Compatriot Luuk de Jong then raced on to Sergino Dest's pass to score his first goal since joining on a season-long loan from Sevilla.

Substitute Ansu Fati hit the third on his return from a long-term injury.

Barcelona climb to fifth in La Liga and are five points behind leaders Real Madrid with a game in hand. Real were held by Villarreal on Saturday.

Barcelona v Levante as it happened

The pressure had been growing on manager Koeman after two wins from five La Liga matches this season had left them well adrift of the early pacesetters.

And although Koeman was absent from the dugout on Sunday, having been dismissed for dissent in Thursday's goalless draw with Cadiz, his players had little trouble in putting an end to a three-game winless run in all competitions.

Levante failed to register a shot until the 81st minute, while Depay was thwarted by several good saves from Aitor Fernandez.

A return and goal for 18-year-old Fati - wearing Lionel Messi's number 10 shirt on his first appearance since November 2020 after undergoing knee surgery - completed a fine success.

Attempt missed. Alejandro Cantero (Levante) left footed shot from a difficult angle on the left is close, but misses to the left. Assisted by Pablo Martínez.

Attempt missed. Roger Martí (Levante) right footed shot from outside the box is too high. Assisted by Gonzalo Melero.

Attempt saved. Alejandro Cantero (Levante) right footed shot from long range on the left is saved in the centre of the goal. Assisted by Pablo Martínez.

Carlos Clerc (Levante) is shown the yellow card for a bad foul.

Attempt blocked. Ansu Fati (Barcelona) left footed shot from the left side of the box is blocked. Assisted by Nico González.

Who is New York named after and why? Go on a fact-finding journey about famous places that have changed namesBreaking the mould: Meet the women taking the wheel in a male-dominated car industry