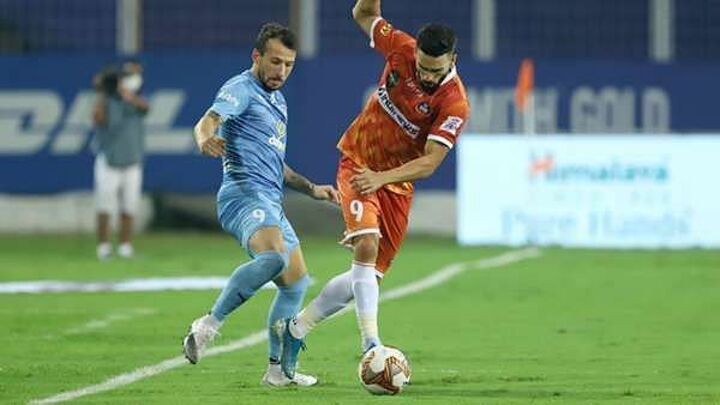 Mumbai City FC and FC Goa played out an entertaining 2-2 draw in the first leg of their ISL semi-final clash on Friday. While Igor Angulo and Saviour Gama scored for FC Goa, Hugo Boumous and Mourtada Fall found the back of the net for Mumbai City FC, who twice restored parity in the game.

Here is how the players fared on the day.

Dheeraj commanded his defense well, but he could not have done anything to prevent the two goals.

Seriton, who was up against the pace and trickery of the Mumbai City FC forwards, held his own and did well on the day.

Barring a lapse in concentration in failing to mark Mourtada Fall for Mumbai City FC's second goal, Donachie was composed throughout the game.

As was the case with Donachie, Khan could have been more alert to prevent Fall from making it 2-2.

Gama's strike from outside the box made it 2-1 in FC Goa's favor in the 59th minute. But his goal was canceled out by Mumbai City FC just two minutes later. Overall, Gama proved his worth to his team on Friday.

Although busy and industrious as always, Bedia lacked that killer final ball for the attackers upfront.

Glan Martins perfectly executed his role as the midfield disruptor. FC Goa would be happy with the effort he put in.

Jesuraj worked hard throughout the match and was efficient at counter-pressing the Mumbai City FC players whenever required.

Rebello used his pace and trickery to frequently beat the Mumbai City FC full-backs. But more importantly, he was lucky to escape without any serious injury as Mourtada Fall harshly tackled him in the late stages of the match.

Although Ortiz did not have the desired impact, he was still busy and industrious throughout the match.

Angulo showed great composure to step up and dispatch his penalty with ease to break the deadlock. He was a handful for the Mumbai City FC defenders at times.

Amrinder should have ideally done better to save Saviour Gama's strike from outside the box. Apart from that, he did little wrong throughout the match.

Mandar had a poor outing and even conceded a penalty in the first-half, with Igor Angulo converting the resultant spot-kick.

Fall, who scored Mumbai City FC's second goal, was extremely lucky to escape a straight red card for his reckless challenge on Princeton Rebello towards the end of the game. The incident pretty much overshadowed his contributions throughout the match.

Stepping in for Hernan Santana, Mehtab Singh did an excellent job of marshaling the defense. He made several interceptions which were crucial to Mumbai City FC not conceding more than two goals.

Vignesh's passing was a little off the mark as he gave the ball away on numerous occasions.

Fernandes gave his all as always, and if he had added a little precision to the passes he played into the final third, it would have been an even better outing for him.

Ahmed Jahouh put on a show against FC Goa. The passes he sprayed wide with ease were essential to how Mumbai City FC played on the day.

Boumous showed why it was not a mistake to include him in the starting XI as he scored Mumbai City FC's first equalizer.

Bipin was industrious throughout the match and justified his inclusion by winning several balls high up the pitch to initiate attacks for Mumbai City FC.

Le Fondre put in one of his most robust performances of the season on Friday. He is due a goal and there will be no better time for it to come than in the semi-final second leg.

Ogbeche's touch let him down on a few occasions against FC Goa. While he was dominant in the air, the Nigerian should have done better overall.