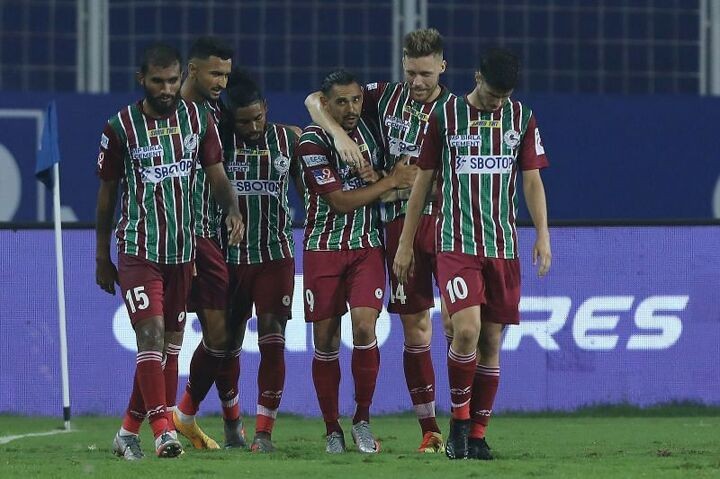 FC Goa played out a 1-1 draw against ATK Mohun Bagan in the 62nd match of the 2020-21 Indian Super League (ISL) Season at the Fatorda Stadium in Margao, Goa. Edu Garcia put ATK Mohun Bagan ahead with a superb free-kick but the Gaurs proved that they are indeed the comeback kings of this season.

ATK Mohun Bagan started the match on a quick note as Edu Garcia let a couple of shots fly from long range. The ISL debutants showcased a lot more intensity and pressed high when compared to their previous game against Mumbai City FC.

The hosts FC Goa slowly came into the game with a counter-attacking move in the eighth minute. Alberto Noguera passed the ball to Alexander Romario Jesuraj and the winger put in a cross into the box but Arindam Bhattacharja caught it comfortably.

The consistent pressure on ATK Mohun Bagan continued as Brandon Fernandes’ cross was headed just over the post by Jorge Ortiz Mendoza. At the other end, the Mariners came very close to taking the lead when Subhasish Bose struck the crossbar with his header from an Edu Garcia corner kick.

FC Goa also threatened to disturb the scoreline. Alberto Noguera’s reverse pass into the box allowed the right back Seriton Fernandes to get to the byline and attempt a cross. However, his delivery took a deflection off Sandesh Jhingan before clipping the crossbar.

The half came to an end with FC Goa piling men into the opposition box but either the final pass or shot was missing as they searched for a goal. Brandon Fernandes played a pass to Romario but his shot didn’t trouble Arindam at all.

In the second half, Edu Garcia showed his intent quickly as he took a long-range shot but it went over the crossbar. A few minutes later, Seriton Fernandes came up with a floated shot that hit the far post before popping out.

Seriton then combined well with Lenny Rodrigues to set up the latter for a shot that went wide. Just as the clock ticked over the 60-minute mark, Pritam Kotal delivered a dangerous-looking cross for David Williams but Ivan Gonzalez cleared it to safety.

The Gaurs took a couple of blows later on as Brandon Fernandes’ injury-forced substitution was followed by an ATK Mohun Bagan goal.

James Donachie brought down Roy Krishna outside the box and the referee had no option but to penalize the FC Goa defender with a yellow card. Thereafter, Edu Garcia came up with a strong free-kick just inside the far post. Goalkeeper Naveen Kumar guilty of being indecisive with his positioning.

Even with FC Goa fighting hard for an equalizer, manager Juan Ferrando didn’t bring on his key striker Igor Angulo but substitute Ishan Pandita did the job for him with his second ISL goal.

Edu Bedia’s initial delivery from the corner kick was met by a header from James Donachie but it was cleared off the line. However, the ball fell kindly to Pandita who tapped it into the back of the net to leave ATK Mohun Bagan stunned.

The Mariners could have had a super-sub of their own but the crossbar denied Manvir Singh’s header from a Javi Hernandez free-kick. FC Goa also gave their all to take the lead but the ATK Mohun Bagan stood tall as both the teams settled for a draw.

Left-back Saviour Gama was named as the ‘Hero of the Match’ for his neat performance at both ends of the pitch. The FC Goa developmental academy player has been constantly improving after being instated as the team’s first-choice left-back.

On Sunday, Gama was tasked with the difficult job of restricting David Williams and Prabir Das but he succeeded with flying colours. The 23-year-old came up with four interceptions and three tackles to provide confidence on the left flank. He also drove forward and got into advanced positions although there is still work to do in terms of the final output.